We set off from the hotel at 8:00 this morning for our first day of cycling, however our journey started on the minibus rather than the bikes so we could avoid the worst of the traffic in Ho Chi Minh City, a city with a population of 10 million people and 5 million scooters!

After about an hour and a half on the bus we pulled over for a brief rest stop where we could stretch our legs, get some coffee or juice in beautiful gardens with with lily-filled ponds. Another short 20 minute hop on the bus took us to our rendezvous point with the truck carrying our bikes, and we finally saddled up to begin our cycling challenge. 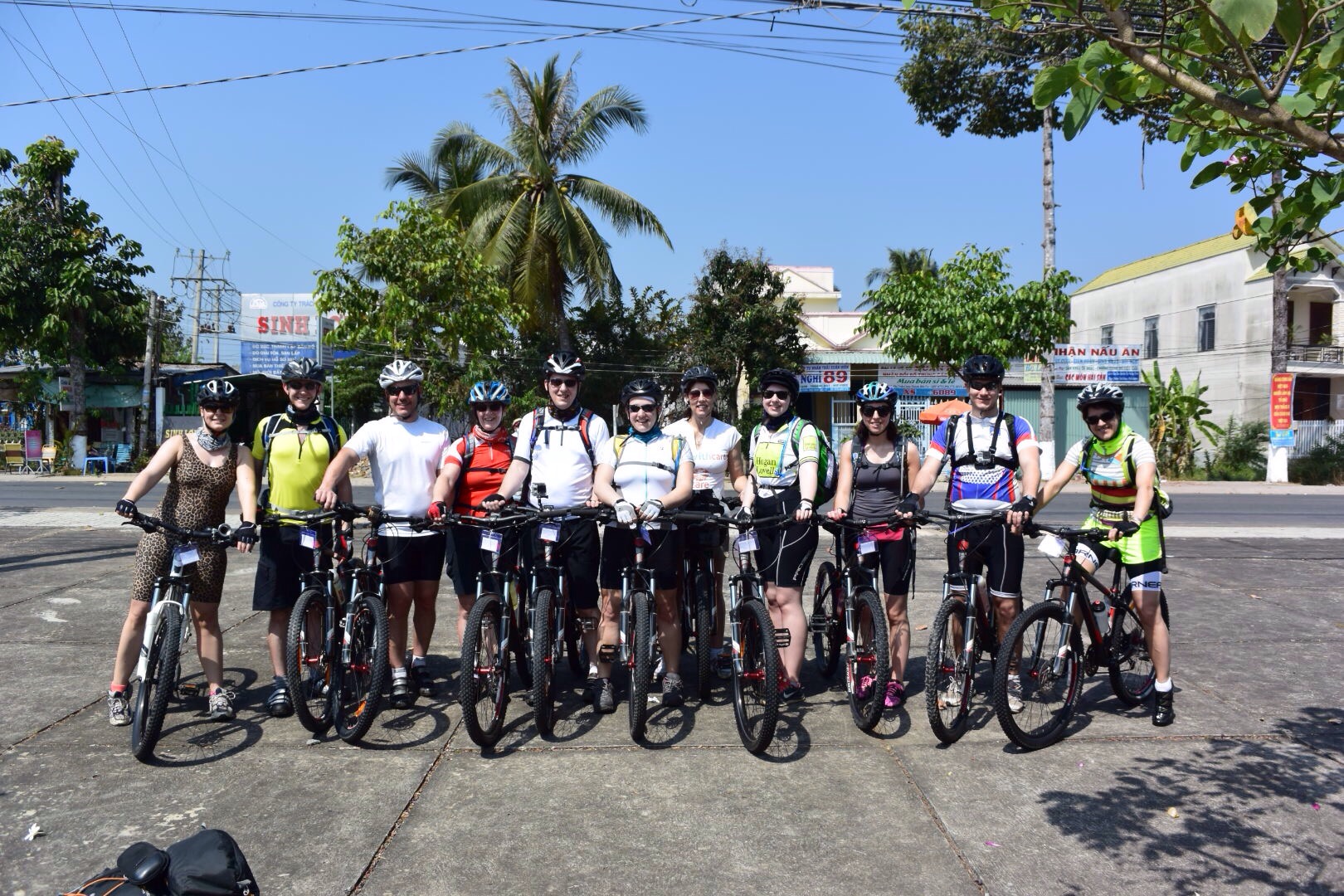 We started out cycling on the main highway out to the Mekon Delta, but soon pulled off onto the narrow white concrete paths surrounded by coconut palms. At first it felt like we were cycling through some sort of park, but these paths are in fact the arteries that connect the villages to one another – with traffic dominated by 2 wheels there’s little need for wide roads.

The group quickly became skilled in avoiding oncoming scooters, pedestrians, and cyclists, and shouts of “Bike!” passed from the back to the front warned of traffic approaching from behind.

When we arrived at a small town bordering the mighty Mekong River the narrow paths became wider roads once again, but the sheer volume of traffic meant we had to keep our wits about us to avoid colliding with someone or something. We’d all done plenty of training in the run up to the event, but nothing could really have prepared us for this! Normal conventions of driving or cycling on the right hand side of the road were abandoned as scooters and vans approached from all directions.

In the briefing the previous day, Phat and Hai had told us that problems only really happen if you do something unpredictable. And sure enough, moving ahead slowly but confidently we threaded our way through the traffic unscathed.

As we returned to narrower paths, a blast of loud music and balloons alerted us to a wedding party taking place. Shouts of hello greeted us and some of the children rushed out to give us high-fives as we passed.

This part of Vietnam is very flat, so hills aren’t something we have to worry about too much. In fact the only real ascent we encountered today was a large bridge over the Mekon river which rewarded us with fantastic views in the centre and a lovely descent down the other side!

Just over the river, and having cycled for about 90 minutes, we had our first rest stop where Phat and Hai distributed ice cold drinks and a real treat of freshly squeezed sugar cane juice. The dark green hue of the liquid suggested it might taste like some sort of vegetable shake, but instead our taste buds were rewarded with deliciously sweet flavours.

After filling up our water bottles we were back on our bikes and back onto the narrow paths. You never quite know what you’re going to see when you go around each bend in the path, but it’s always interesting! it could be a chicken running out in front of you, shouts of hello, someone towing a pig in a crate on the back of their scooter, or a bridge over a river.

On one particularly rickety bridge we found ourselves up against a truck coming the other way. With centimetres to spare he managed to pass us and we all managed to stay on the bridge and out of the water!

With so much water around, the Mekong delta is a fertile area for growing rice and all manner of other crops, so many of the people here are farmers. As we approached another small gathering of houses, Phat called out to go straight. Jo, who was at the front of the group was a bit startled, as there was nowhere left to go straight. Time to cross the river again on a small ferry, with just us and our bicycles on board. 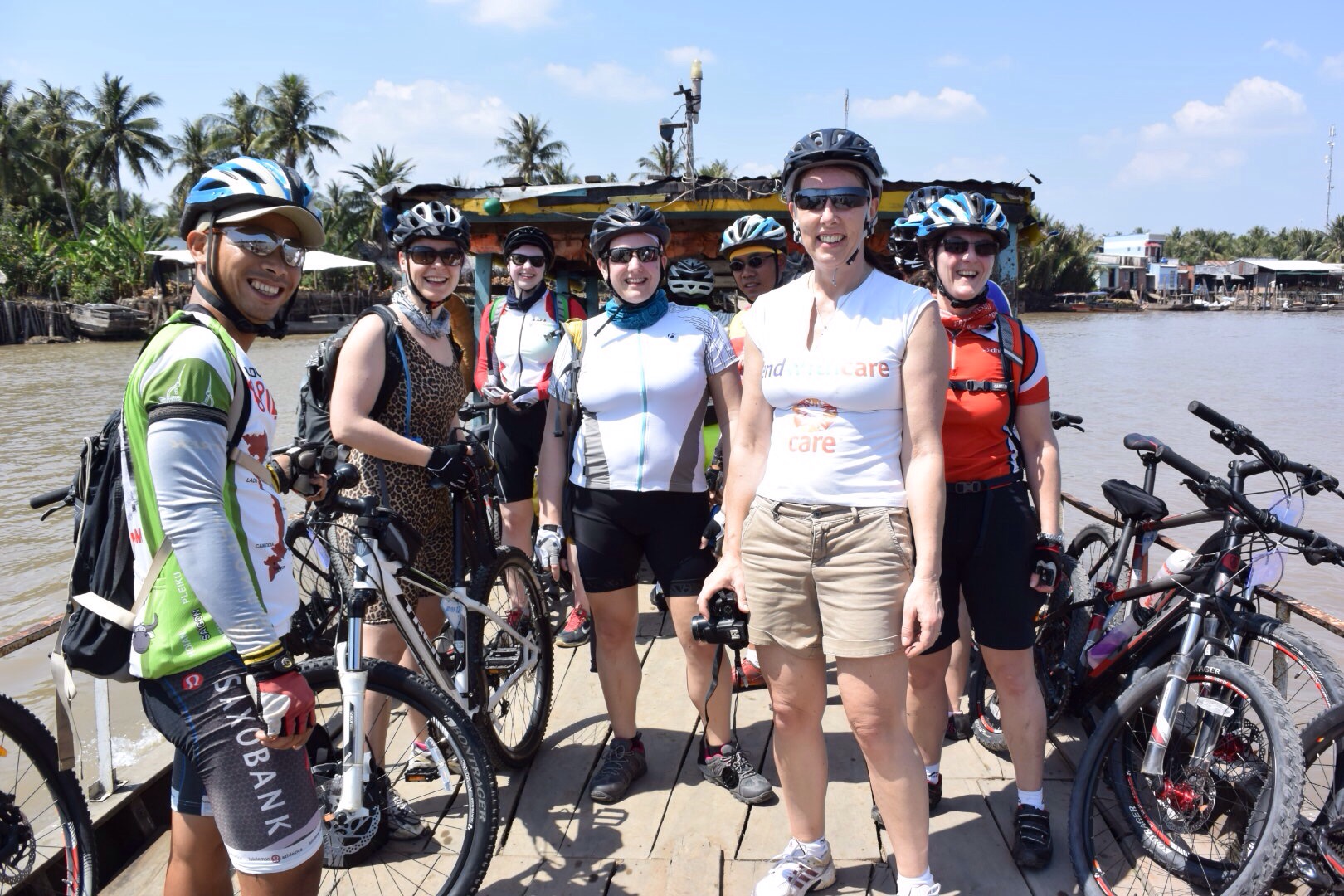 We stopped for lunch at a local store, where we ate a fresh noodle broth, with lime and chilli, then pork and rice with garlicky greens. We’re certainly in no danger of going hungry on this trip – the food here in Vietnam is fantastic.

Suitably refreshed, we got back on the bikes and continued our journey towards Tra Vinh. Passing by the small farms and villages, you get a real glimpse of people just going about their daily lives, with washing drying in the sun and even more cheery hellos, even from the very youngest children who can barely have many words of Vietnamese in their vocabulary! 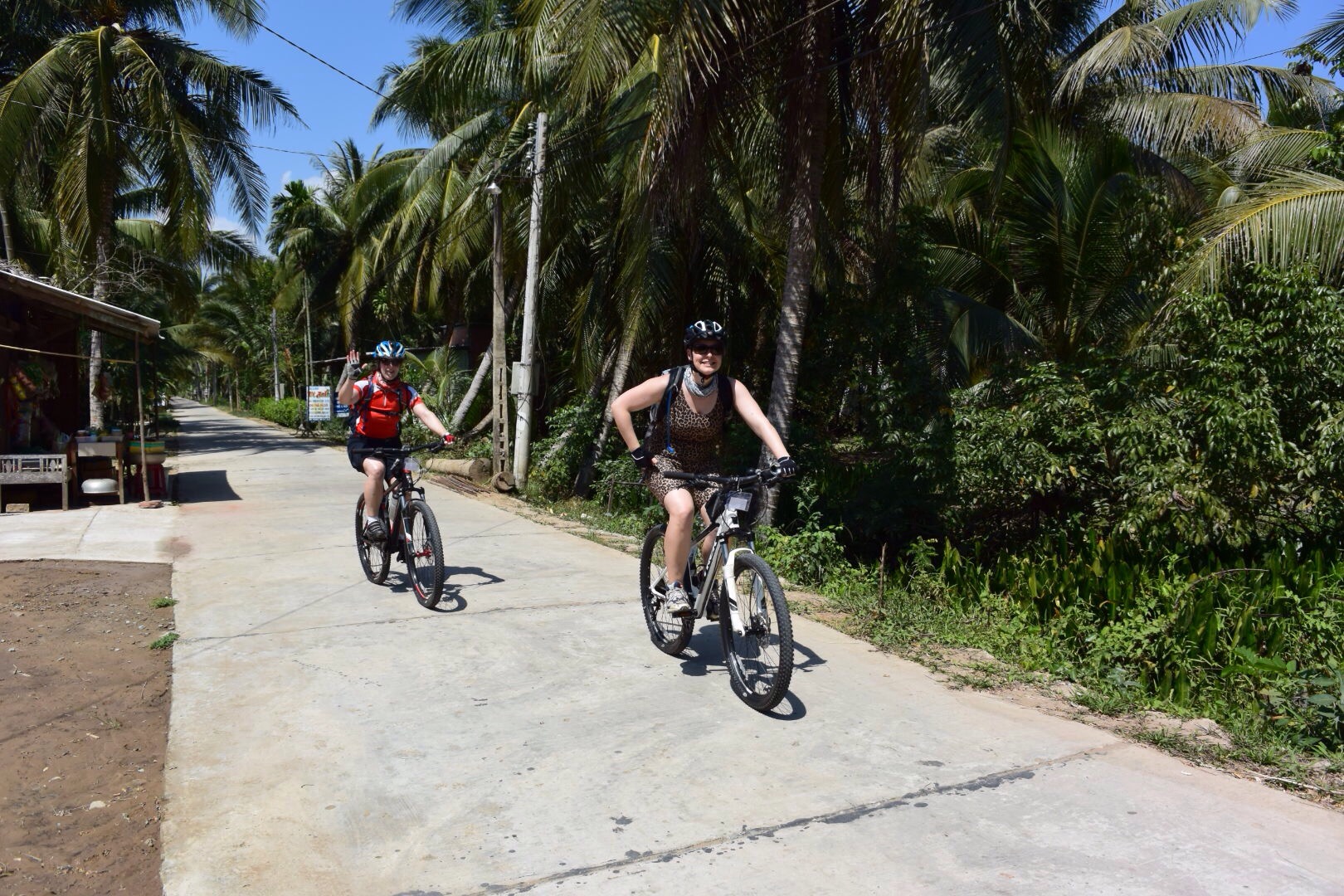 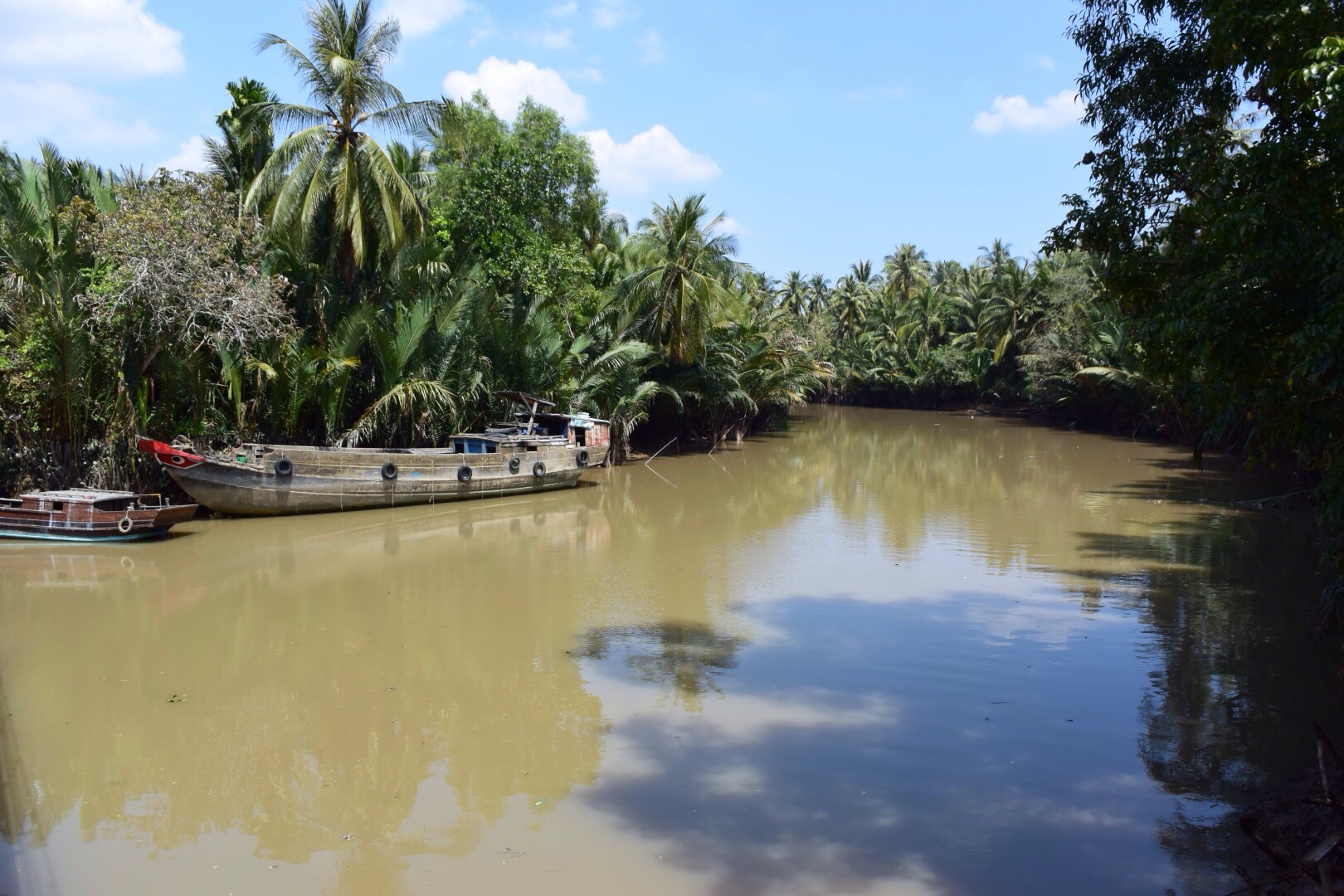 We had a brief stop at a white building with what looked like a huge red flame for its roof. It looked like some kind of temple, but our guides explained this was actually a museum. It commemorates the Mekong Delta revolution in January 1960, which was the start of the Vietnam war.

Just as we were about to set off, we had our first puncture but thanks to Hai’s wheel swapping and repair skills, Laura was soon back on the road.

By mid afternoon, we were approaching our overnight stop in Tra Vinh. The terrain changed a little here, with dusty paths and more uneven ground. And soon there was another part of the river to cross. Phat told us this was a tidal, salt water area and the tide was high.

As we waited for the ferry to arrive, we saw two men unloading a cart full of coconuts onto a boat at the dock. The boat was already pretty full and as the tipped the cart, some of the coconuts rolled off into the water. Luckily, coconuts float, and one of the men jumped into the water to retrieve them.

This was a much wider section to cross, a journey of about two miles, and the ferry was busy with scooters and our bikes as well as a truck. The cooling breeze was very welcome as we took some time just to look around and drink in all the experiences of the day so far. 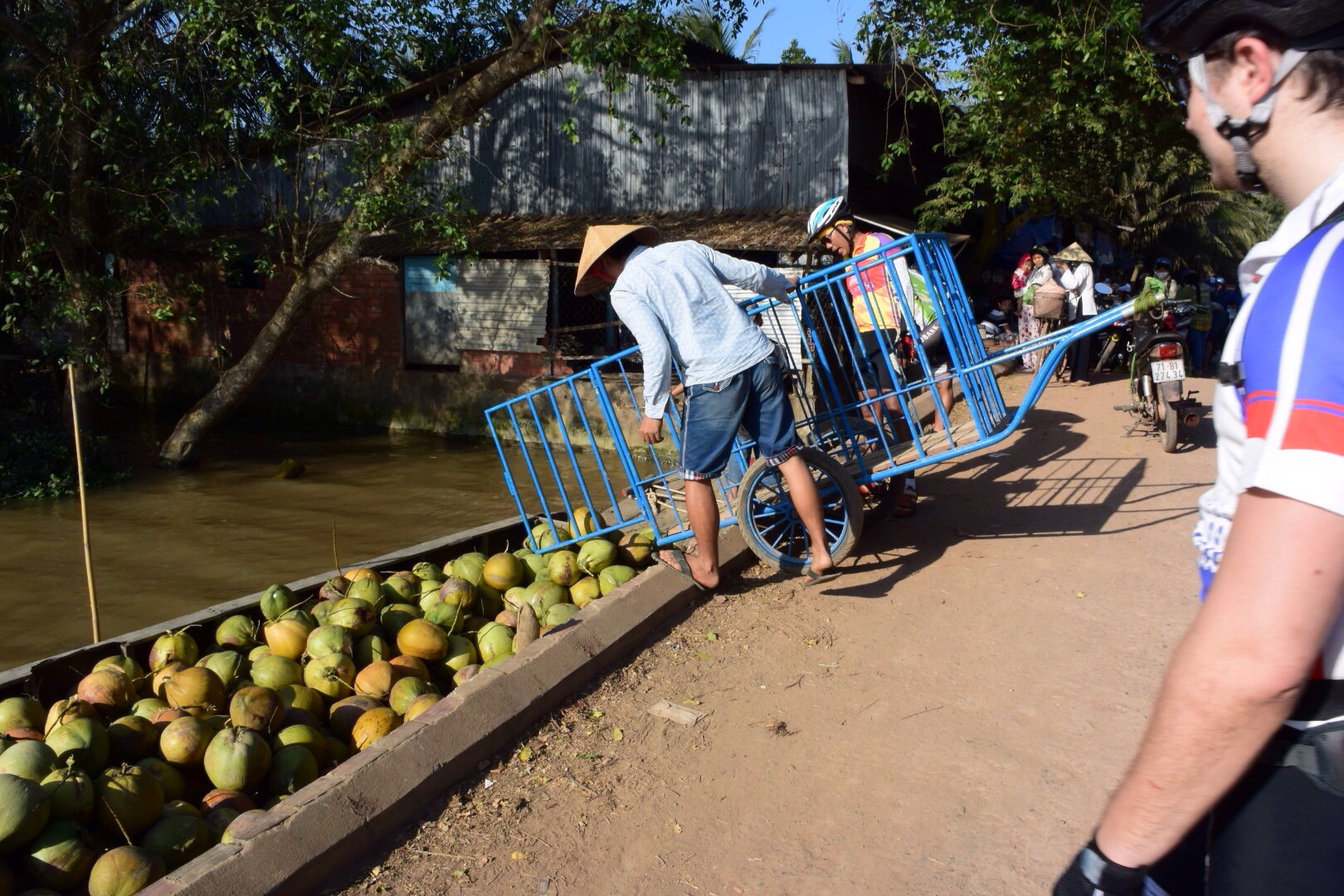 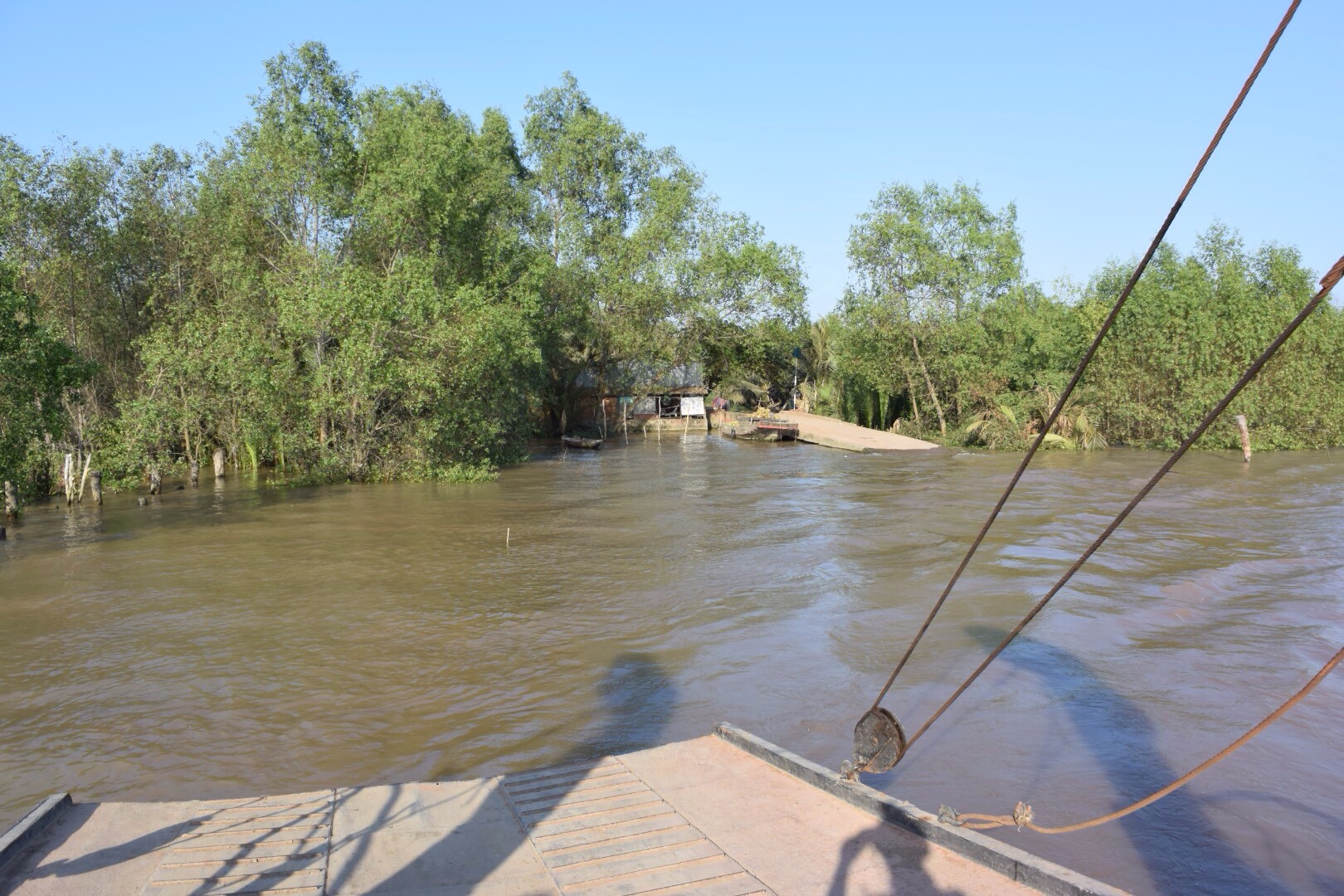 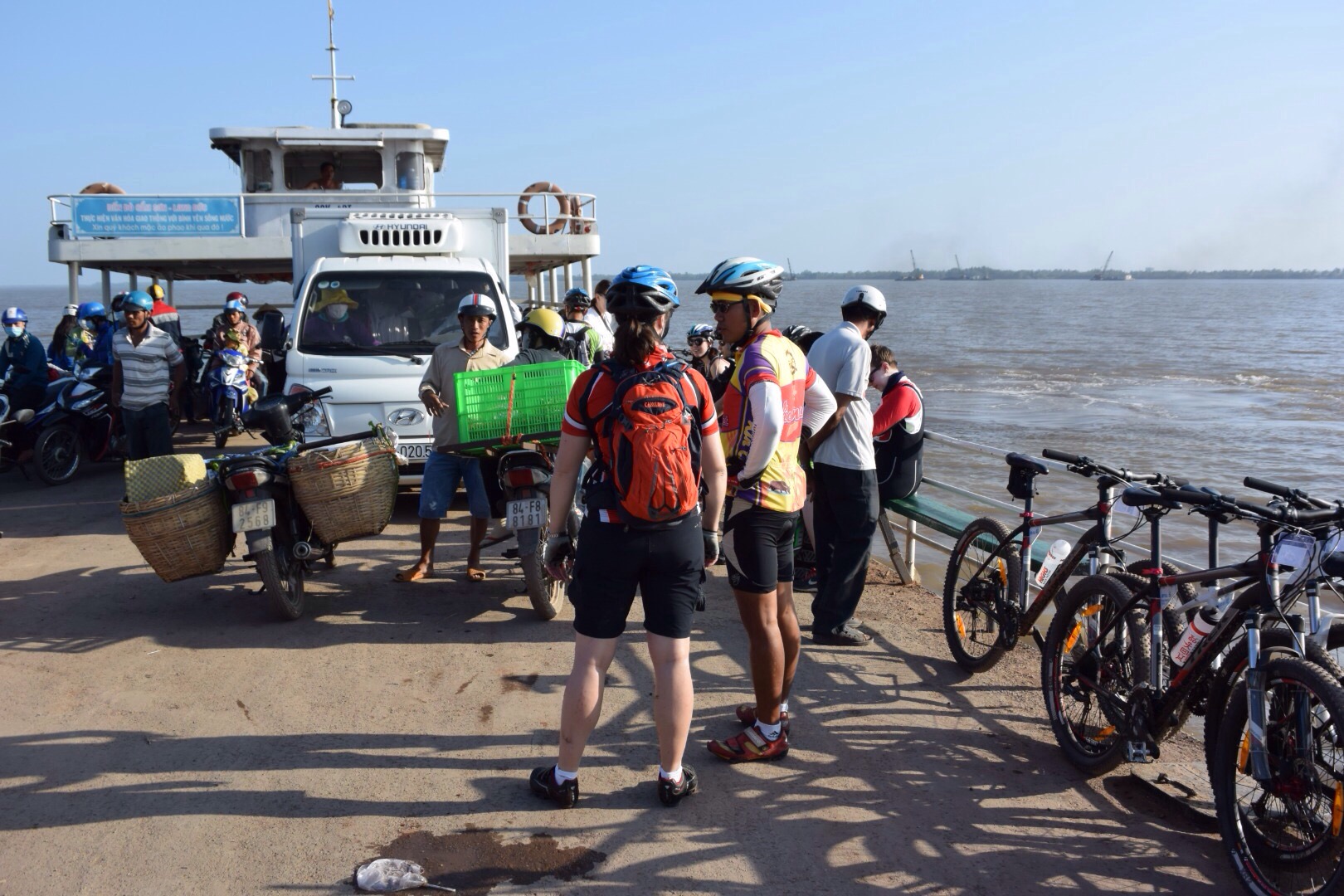 From the ferry crossing, it was a short ride to Tra Vinh. As we got closer, the roads got wider and we were joined by ever more scooters and bikes. Right of way seems to have no meaning here, and it can feel like traffic is approaching from every direction, but the key seems to be to keep looking ahead and not making any sudden changes of direction.