After breakfast we took a 30 minute boat trip to visit to the floating market at Can Tho. Large wholesale boats advertise their produce by hanging it from poles high above the boat. Each boat has only one type of produce on offer, and we saw spring onions, watermelons, and coconuts dangling above. Smaller boats visit the wholesalers to buy the produce that will then be sold back on land at local retailers.

Other boats zip around amongst all the traders offering coffee and drinks as well as hot meals – in fact one brought our boat driver his breakfast. 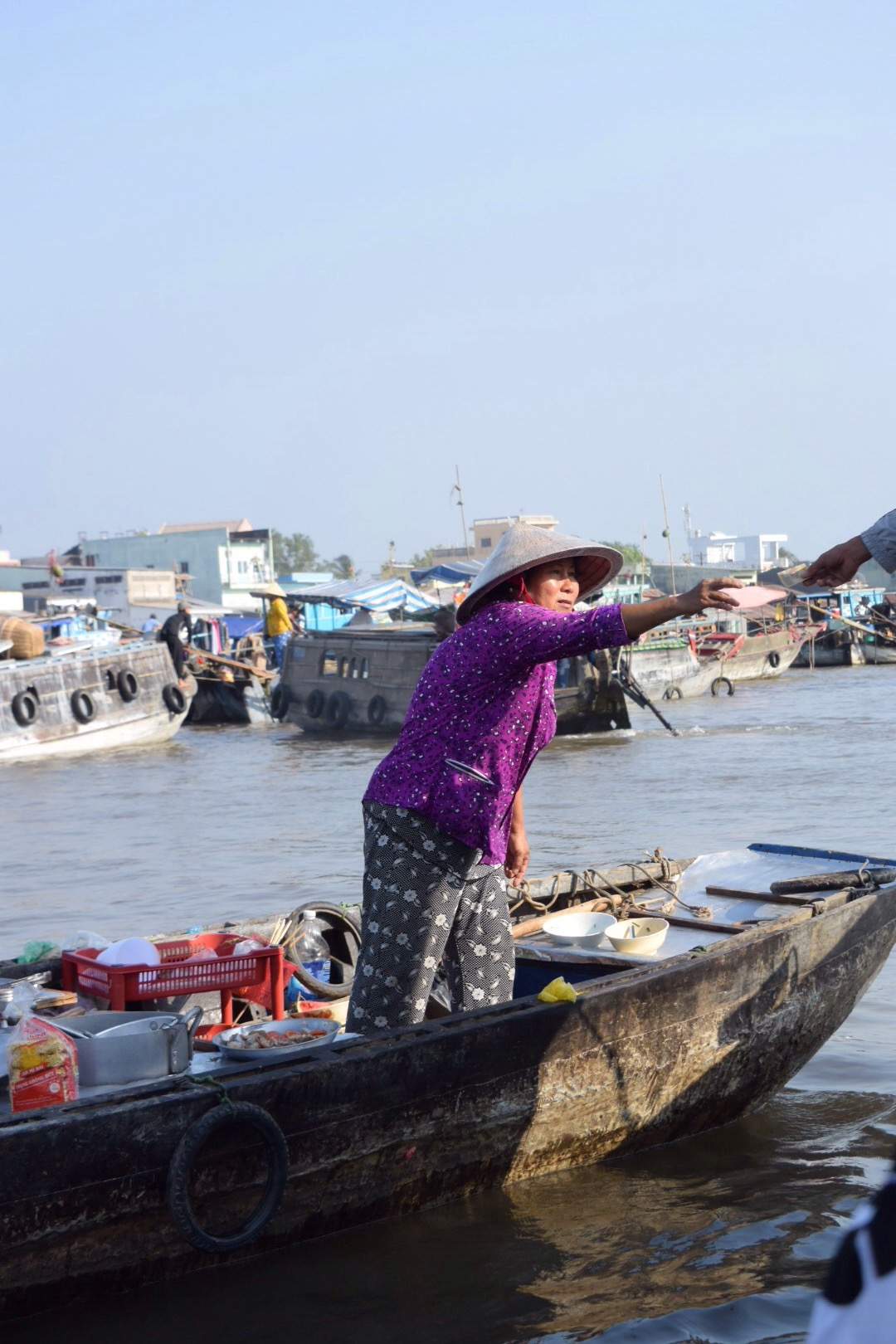 We disembarked at a market on the bank of the river full of women buying fruits and vegetables to take home. I love visiting food markets as they’re always full of life and this one was no different. Kathryn in her leopard-skin cycling suit spotted someone else wearing an animal print who found it quite amusing. 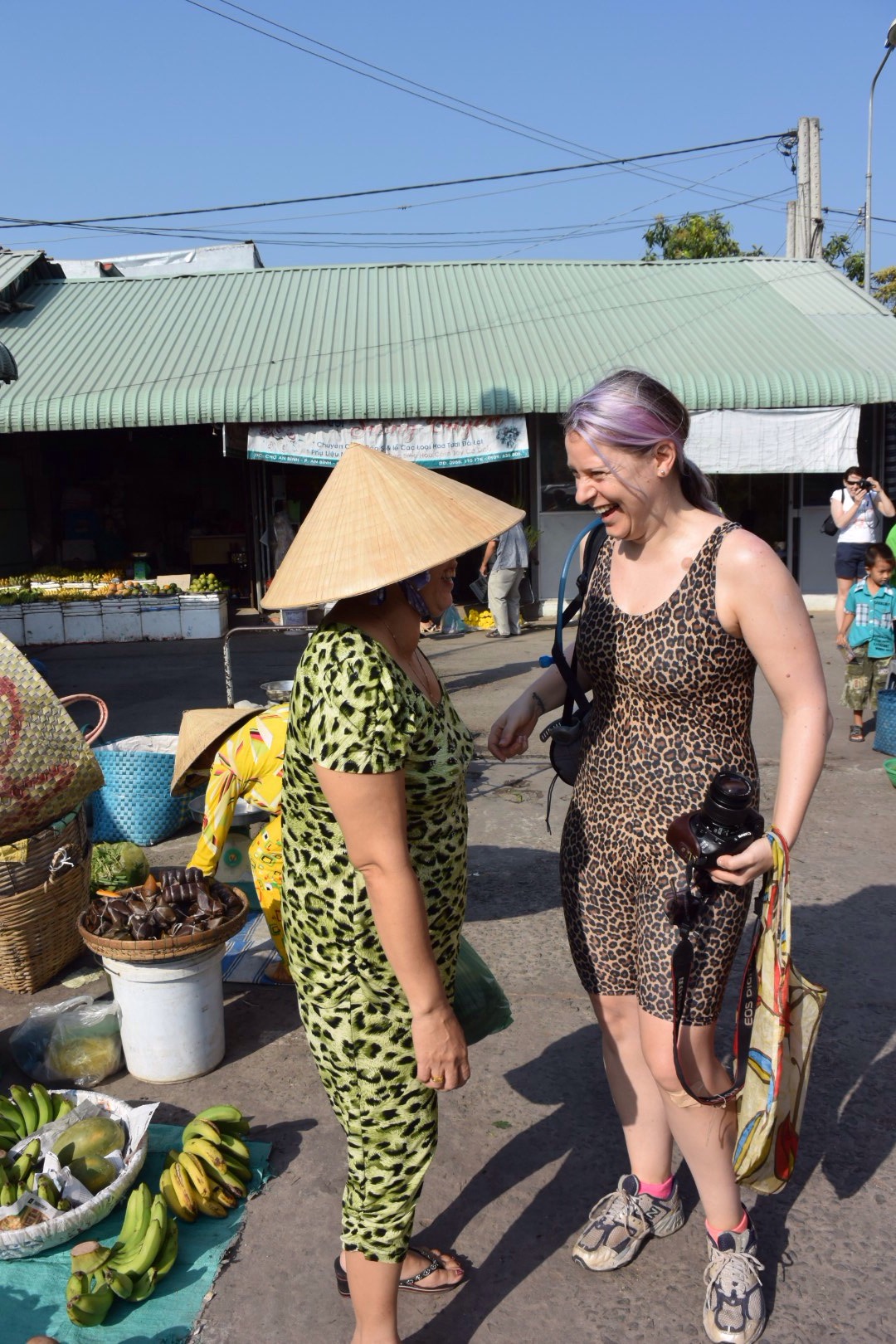 Outside the market we jumped back on our bikes to start another long day of cycling. Once again the scenery changed and we started to see more bamboo and vegetable oats grown by the side of the road. 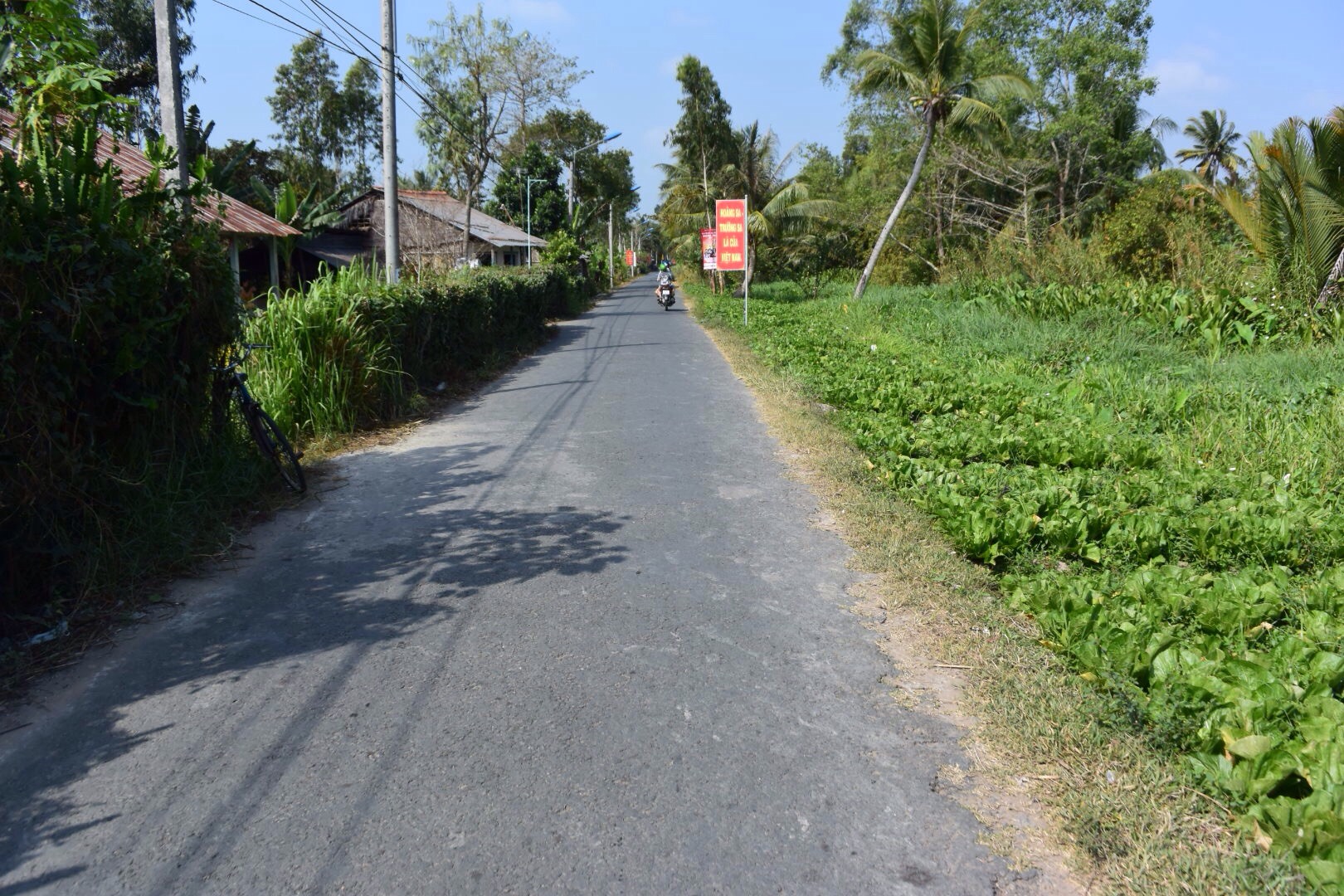 The winding narrow paths were also replaced by more paved and relatively smoother roads, allowing us to cover the distances in less time. We were all more cautious though after the previous day’s mishaps. Gill demonstrated incredible guts and determination by cycling the whole day, despite her shoulder being strapped up.

Laura suffered from a couple of punctures but these were quickly repaired by our elite team of Hai and Phat. Rickety wooden bridges were carefully navigated and along one section we were plunged into darkness as we went through rice processing plants. 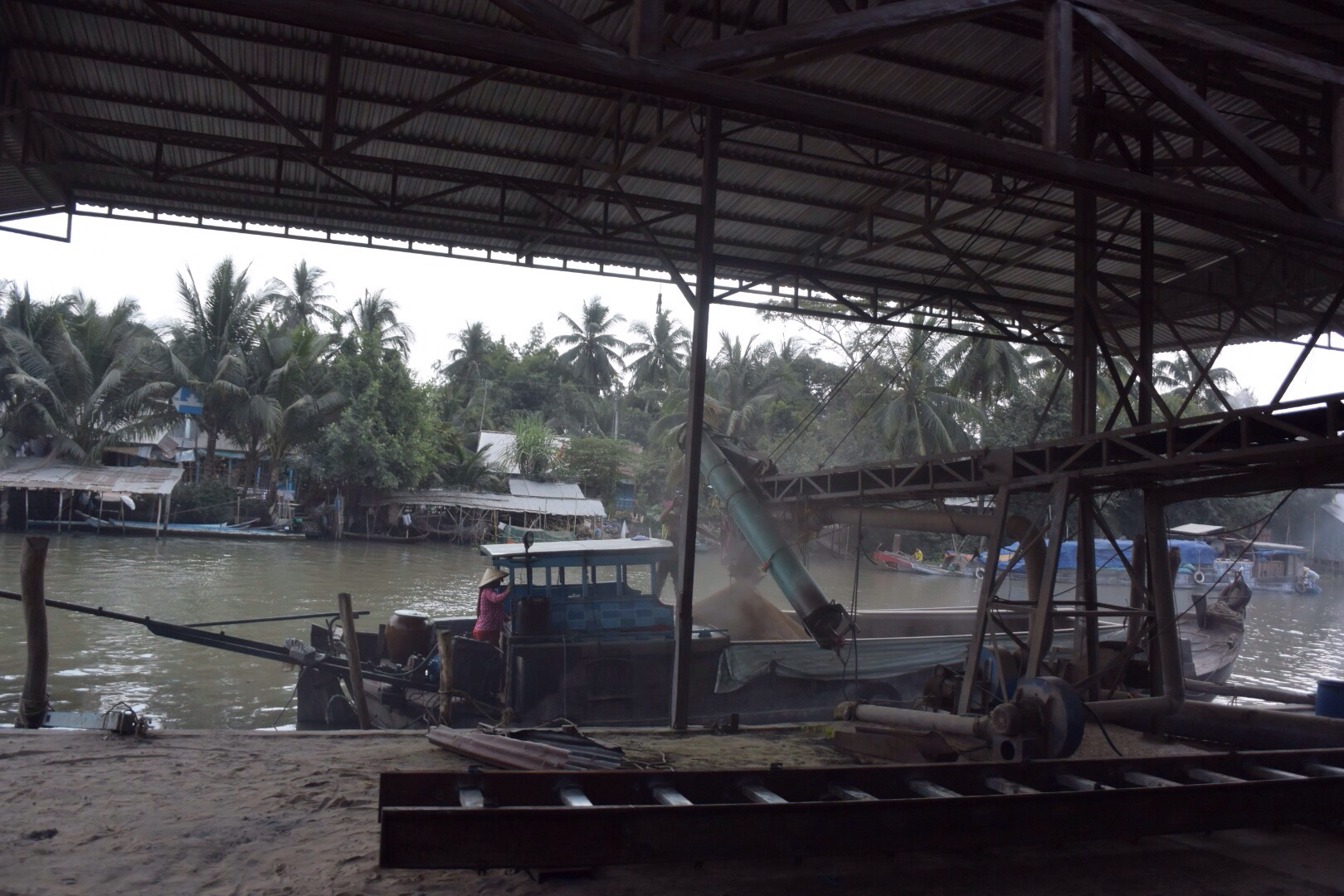 At one rest stop an older Vietnamese gentleman came over to talk to us. He explained he was a veteran soldier and showed us the tattoos on his arms from his army days. 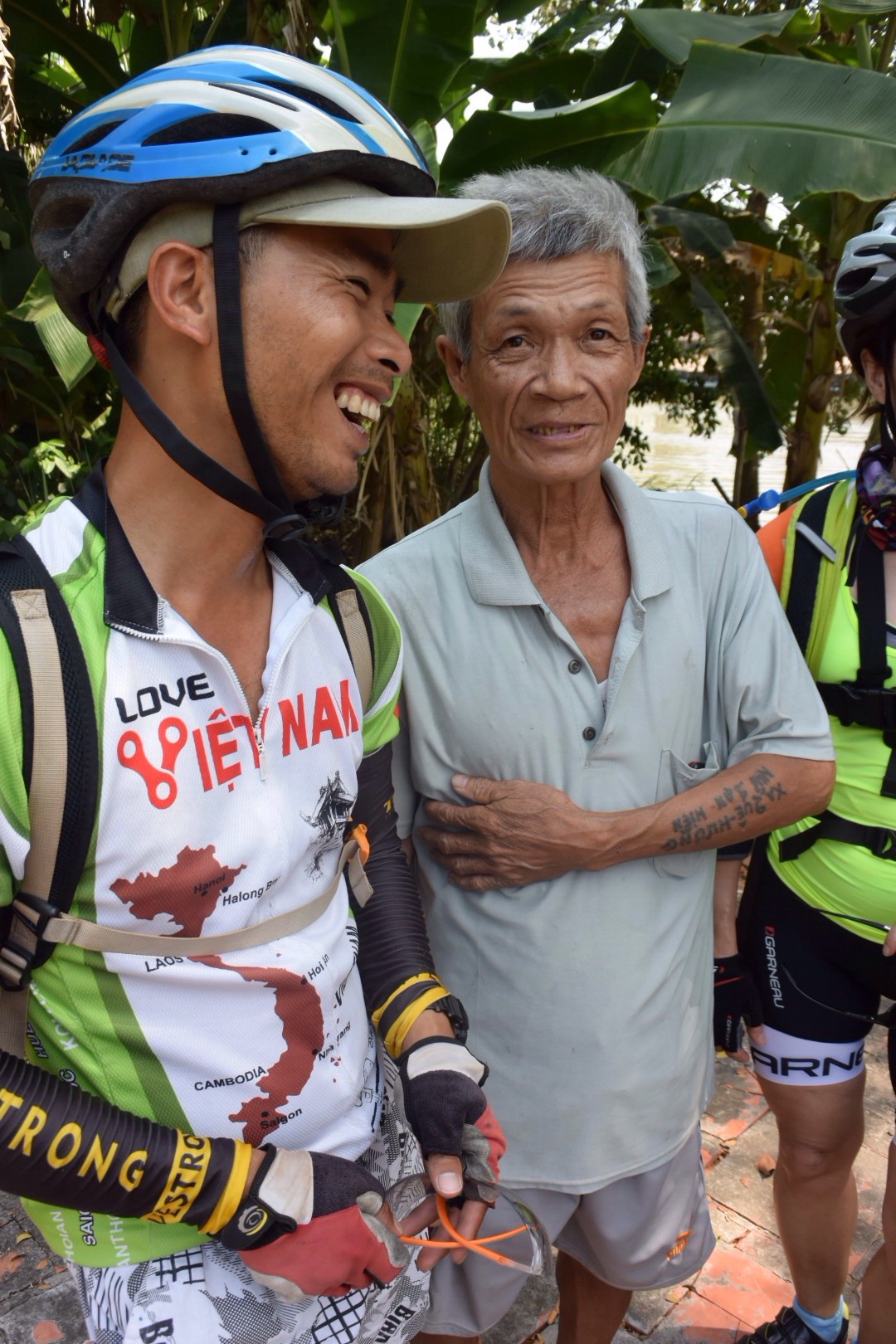 We covered a lot of ground before stopping for a lunch of catfish, soup, rice and delicious beef and green beans.

The afternoon was more of the same cycling and terrain. At one we point we stopped alongside a very minimal bamboo bridge across a river. Phat encouraged us to have a go but most of us declined the offer, especially having seen how much it flexed and bent as he crossed it. Regan took the challenge to a new level though with a bit of yoga in the middle for good measure. 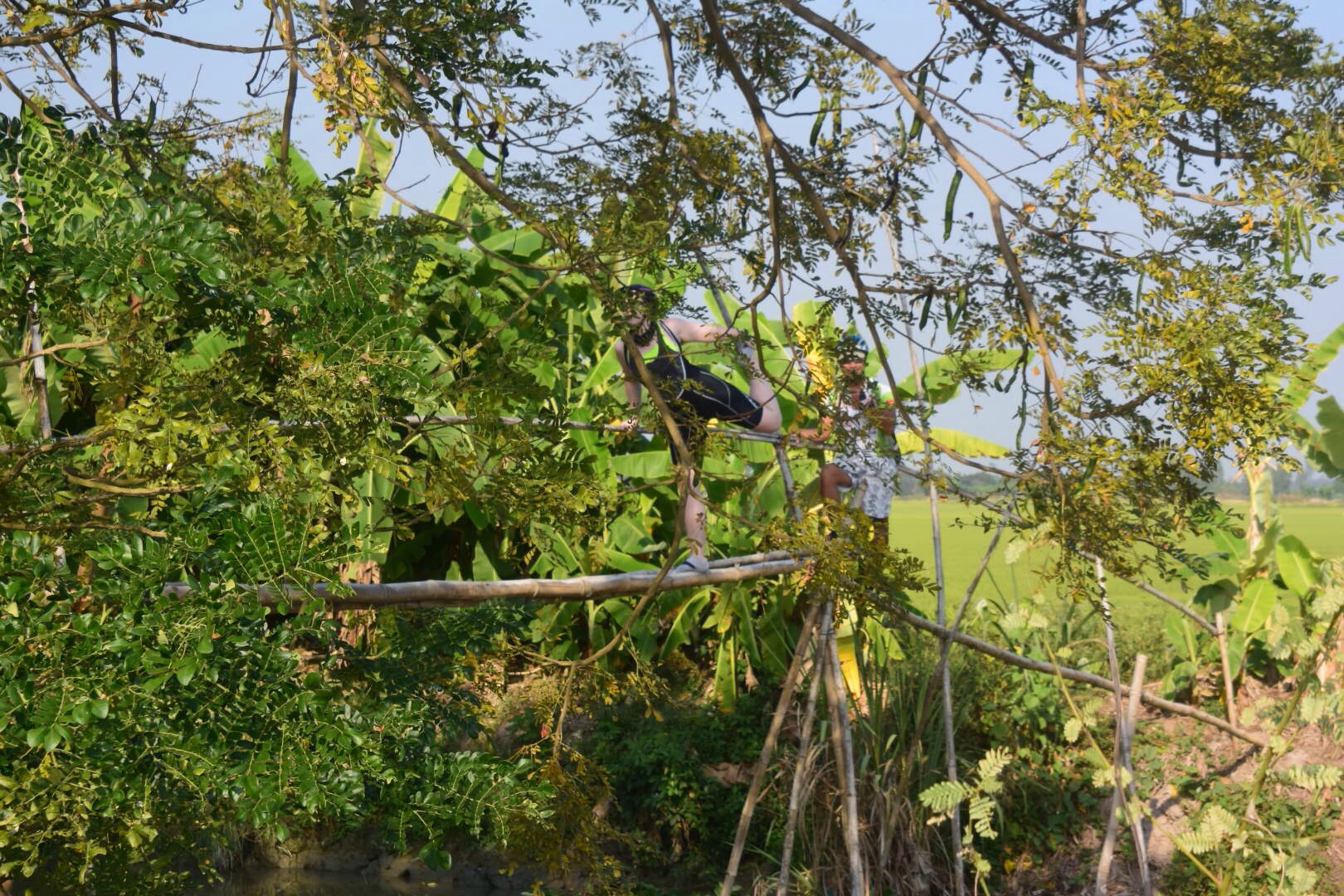 At our final rest stop of the day Daryl joined in a with a game the local kids were playing – keepy uppy with a large shuttlecock.

Towards the end of the day, we approached one village where we could hear loud techno music coming from a house on the other sound of the river. As we passed through the village, people of all ages greeted us with enthusiastic hellos, which helped to inject some much needed energy into tired legs. We all nicknamed it the “happy village” and it was a great way to finish the day’s ride.

On the minibus to the hotel, Phat gave us a potted history of the Vietnam war to help us understand some of the things we’d seen.

The whole group enjoyed private dining at the hotel, which was enlivened when Phat and Hai brought us a bottle of Vietnamese rice wine to try. At 50% proof, it’s much potent than Japanese saki, which resulted in a very merry evening!