It was a 7am start and a relief to be cycling in the cool of the morning on our way to the Ton le Sap river, where we saw a family making smoked fish. First they lined them up in neat rows on skewers, then blackened them over a low fire. This helps preserve the fish so they keep for up to a year, providing a cheap source of protein.

We saw a great many houses on high stilts over the river, showing just how much the wet season floods change the characteristics of this area. 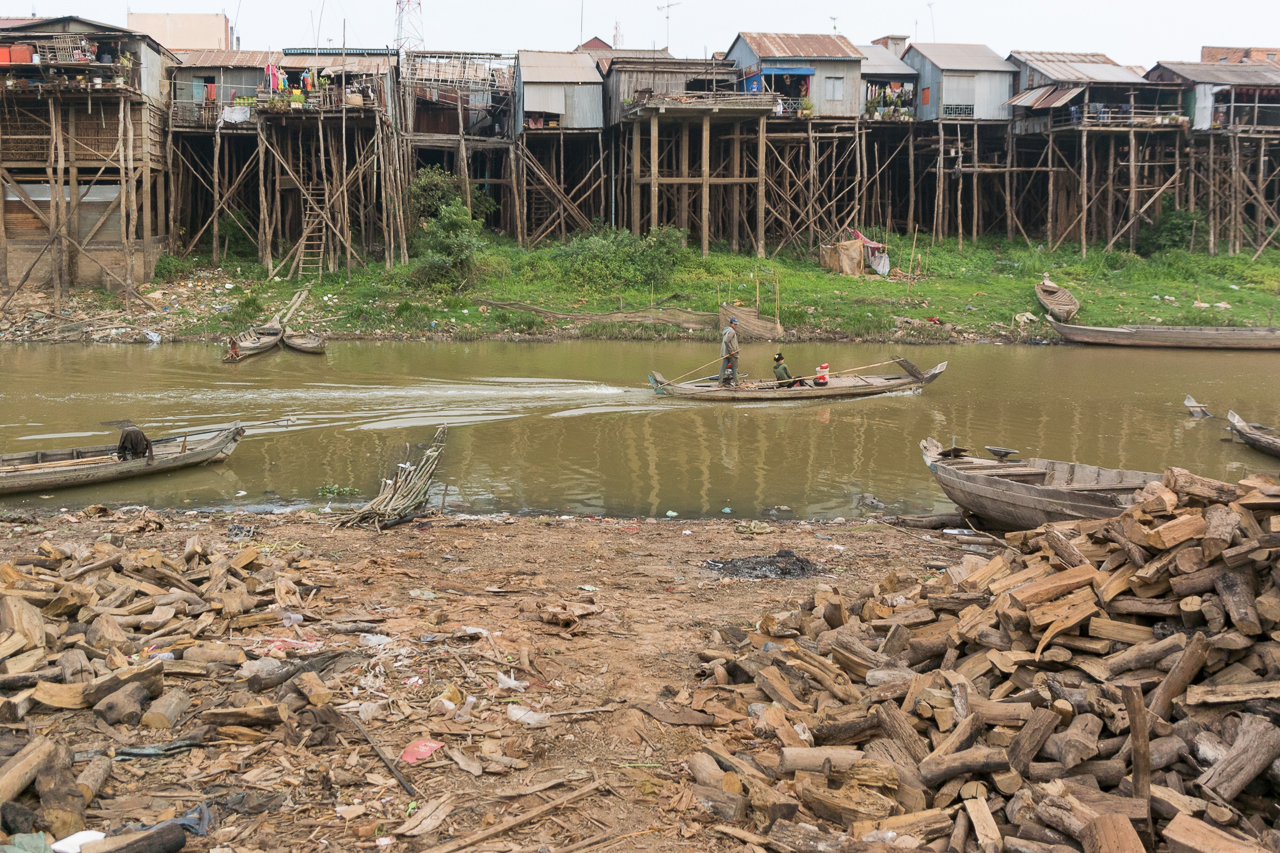 Less than a mile further on, we saw a floating village, where an itinerant community of Vietnamese people live in houses on the river itself. 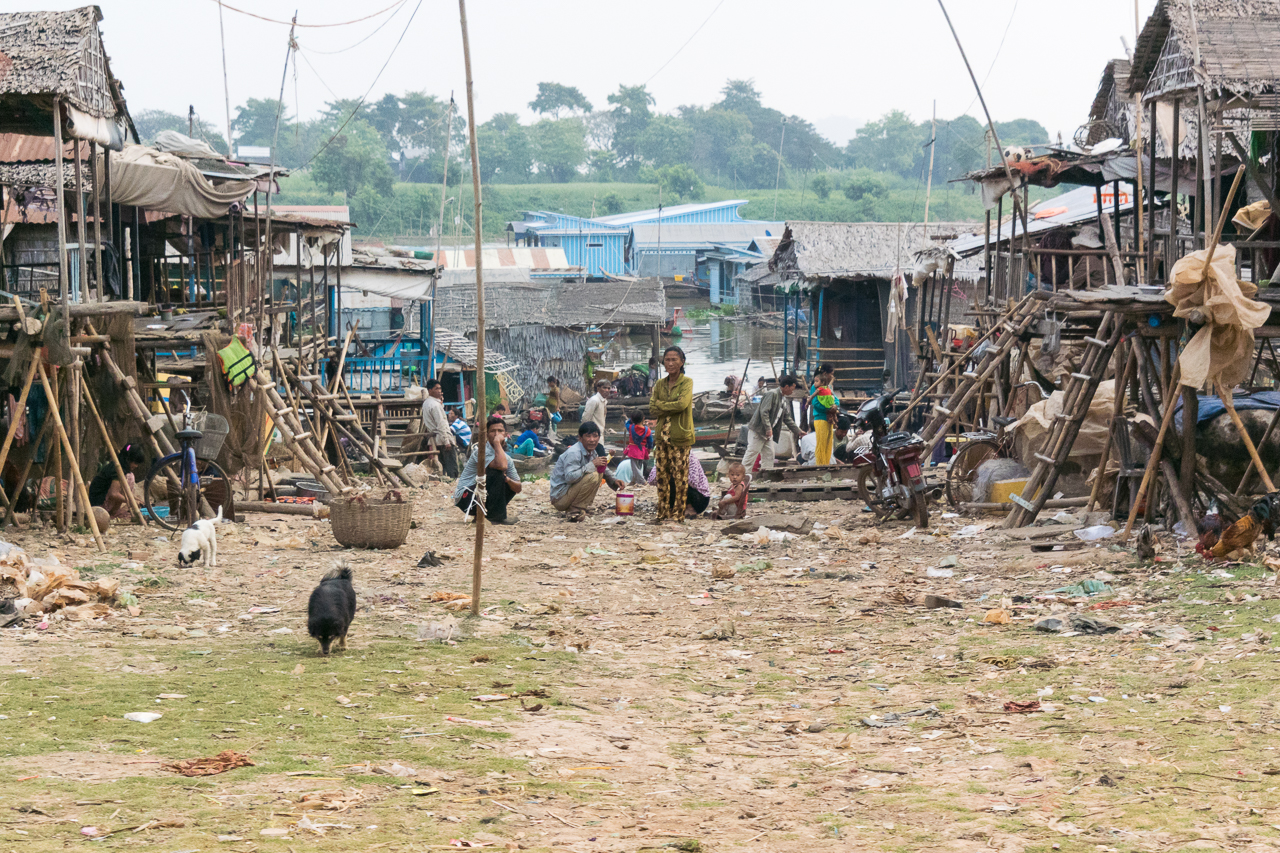 Then it was back on bikes for another stretch which included a deceptive long shallow climb, followed by a glorious coasting descent.
This area is famous for its pottery and the local people go to collect clay from the nearby mountain to make cooking and storage pots. We saw a great number of these beside the road, drying in the sun as we got to our next stop, where we watched a potter at work. 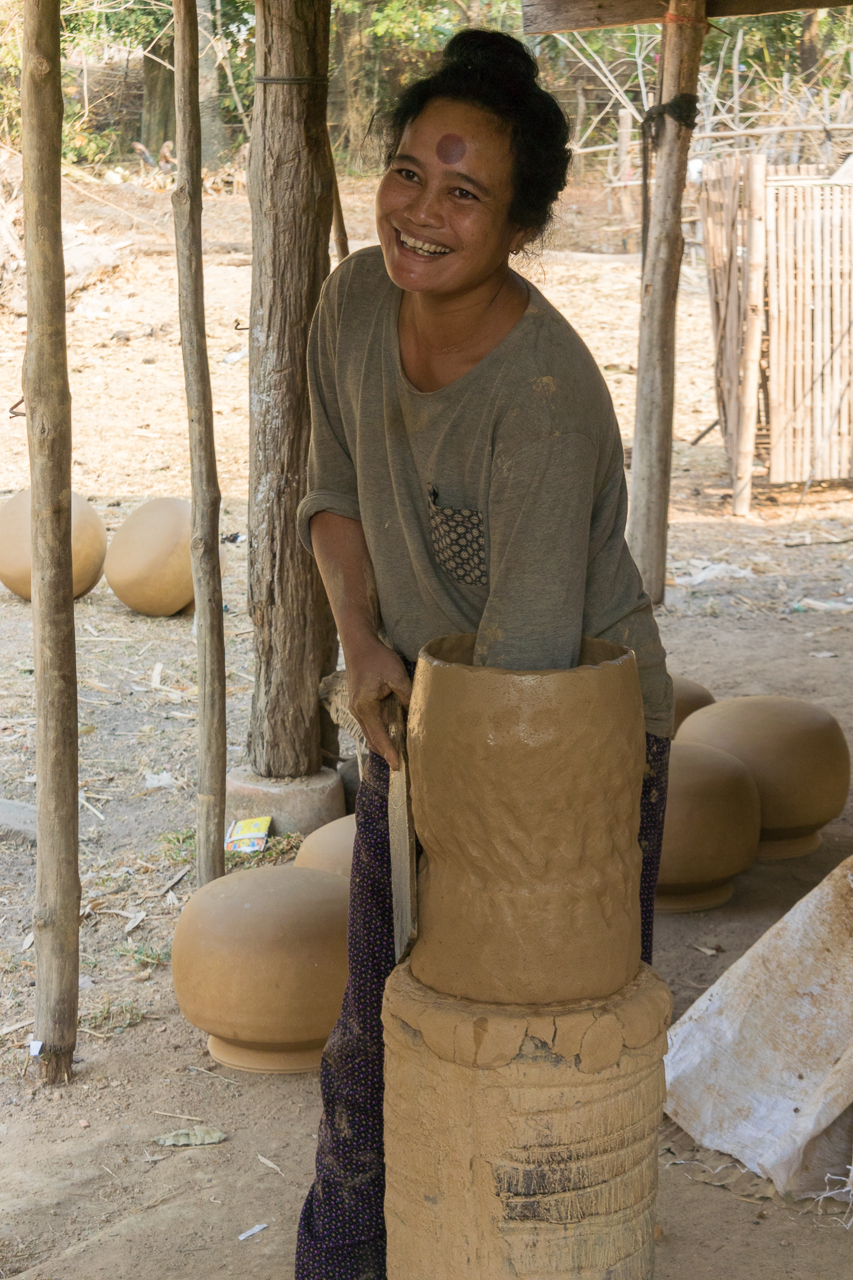 Rather than use a potters’ wheel, this was real back to basics stuff, as the lady demonstrated how she transformed a long tube of clay into a rounded pot by walking round and round it, and shaping it with her hands. You could see a groove in the dirt, where she’d ground out a path.

Laura and I gave it a try. We weren’t sure if the lady was laughing because we looked funny working in our cycling helmets or if it was because she couldn’t believe we were so bad at it. 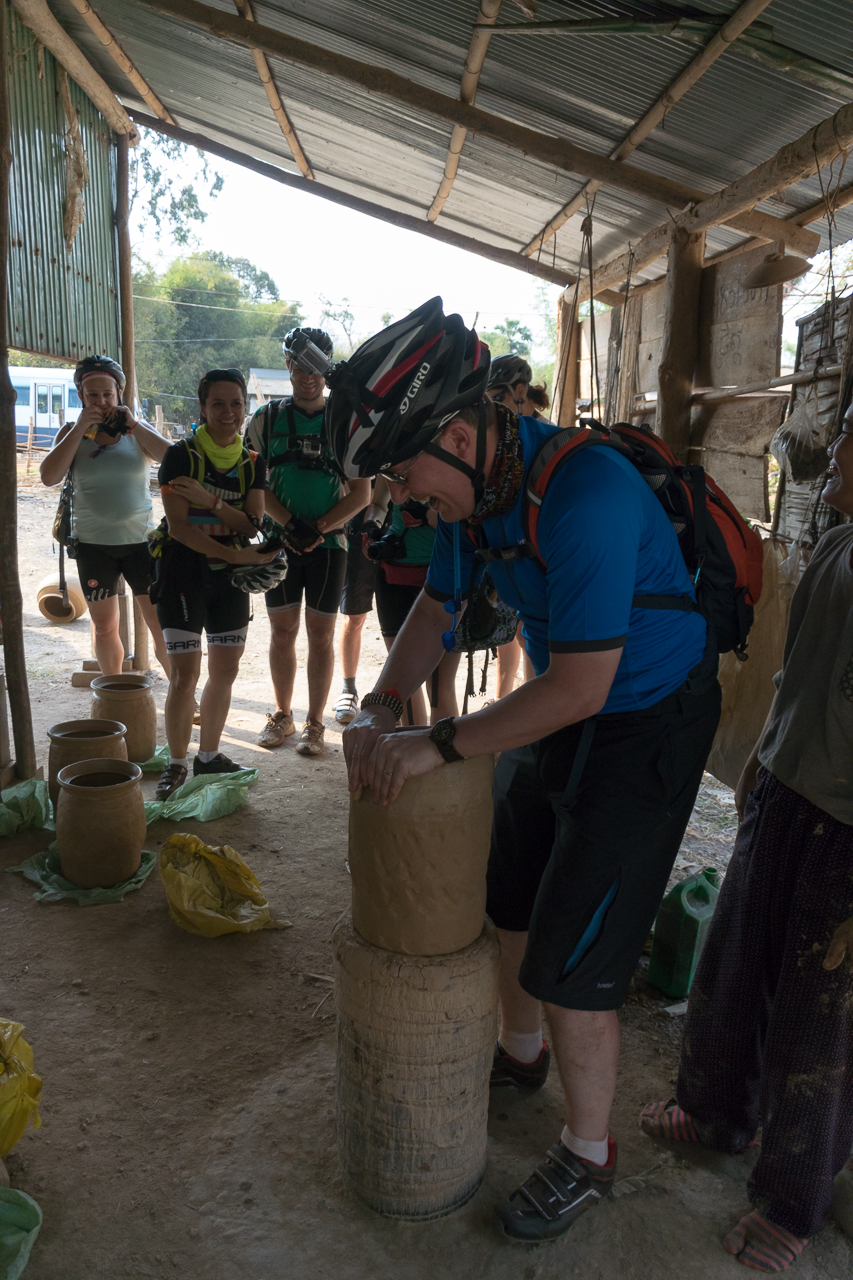 Attempting to make a pot

She told us she can make up to ten pots per day, which she sells for 75 cents each. She leaves each pot to dry in the sun for three days before firing it over a fire of rice husks. This has the advantage over wood, as it’s easily available, and provides the right temperature for the pots.

We provided ready customers for some of the smaller samples and three large pots which we put on the van to take to our next destination, visiting some of the entrepreneurs supported by Lendwithcare.

After a morning’s cycling, we were back on the bus for a 3 hour journey to Battambang in the north west of Cambodia. This area is known for its rice production and is still a hub for trade between Phnom Penh and Thailand, which is only a couple of hours away. As we drove through to our lunch stop in a local restaurant, we saw many French colonial style buildings being used as restaurants and hotels. 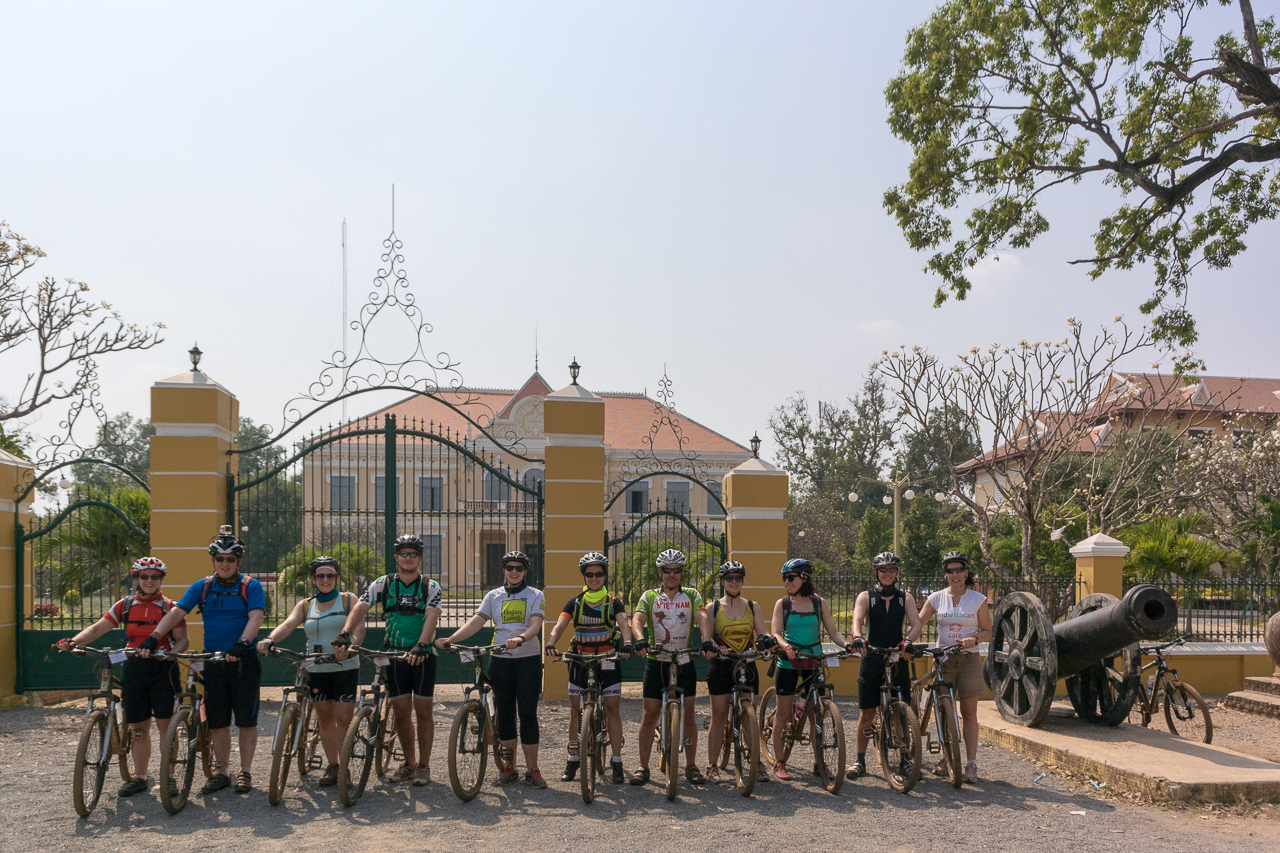 Ready to set off after lunch

At lunch we met members from CCSF, the local Micro-Finance Institution (MFI) that Lendwithcare partners with in Cambodia. They followed in their truck as we rode the short distance to their office where we learned more about the loans and savings services CCSF offer to the local communities. 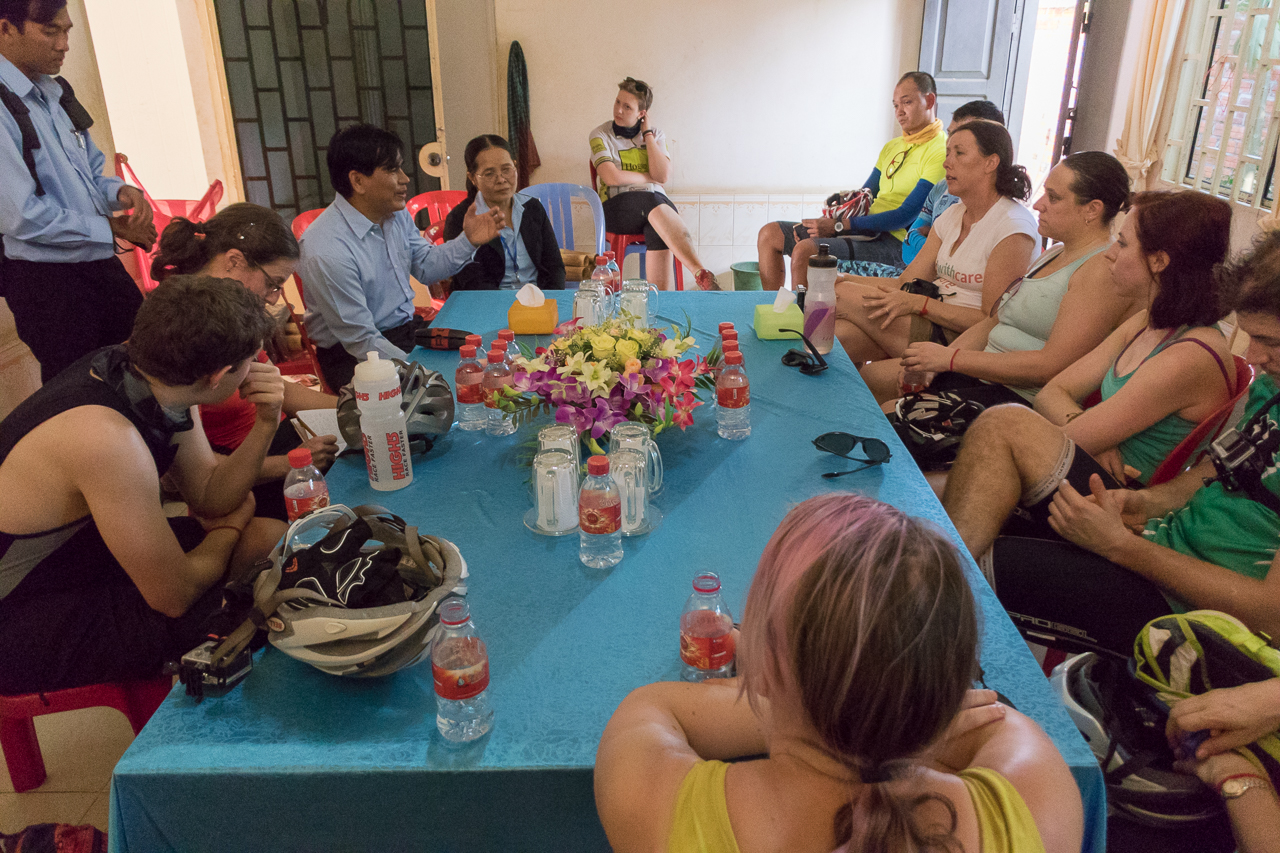 Hearing about the services provided by CCSF

We already knew that Lendwithcare had rigorous criteria they use in selecting MFI partners, but it was great to hear first-hand the additional benefits that CCSF provided to communities over and above the loans themselves. All members were encouraged to save with an attractive rate of interest and the opportunity to win a large payout each month (this reminded me of Premium Bonds model here in the UK). Loans also came with a built-in life insurance policy that not only cleared the loan should a member pass away but also covered funeral costs, to avoid a burden being placed on a spouse or children.

Outside the office we got back on our bikes for a short ride to a nearby village where we met three entrepreneurs who benefit from the loans and savings schemes.

The first lady we met, Mrs Savan Tob, was delighted with her gift of a cooking pot and told us about her business growing beans. She told us that last year, she’d grown watermelons, but that she’d lost a lot of her crops due to heavy rains. And in fact, her house had flooded. This year, she felt the soil wasn’t so good for watermelons, so she was just growing beans. It was a potent reminder about the effects of climate change at a very personal level. 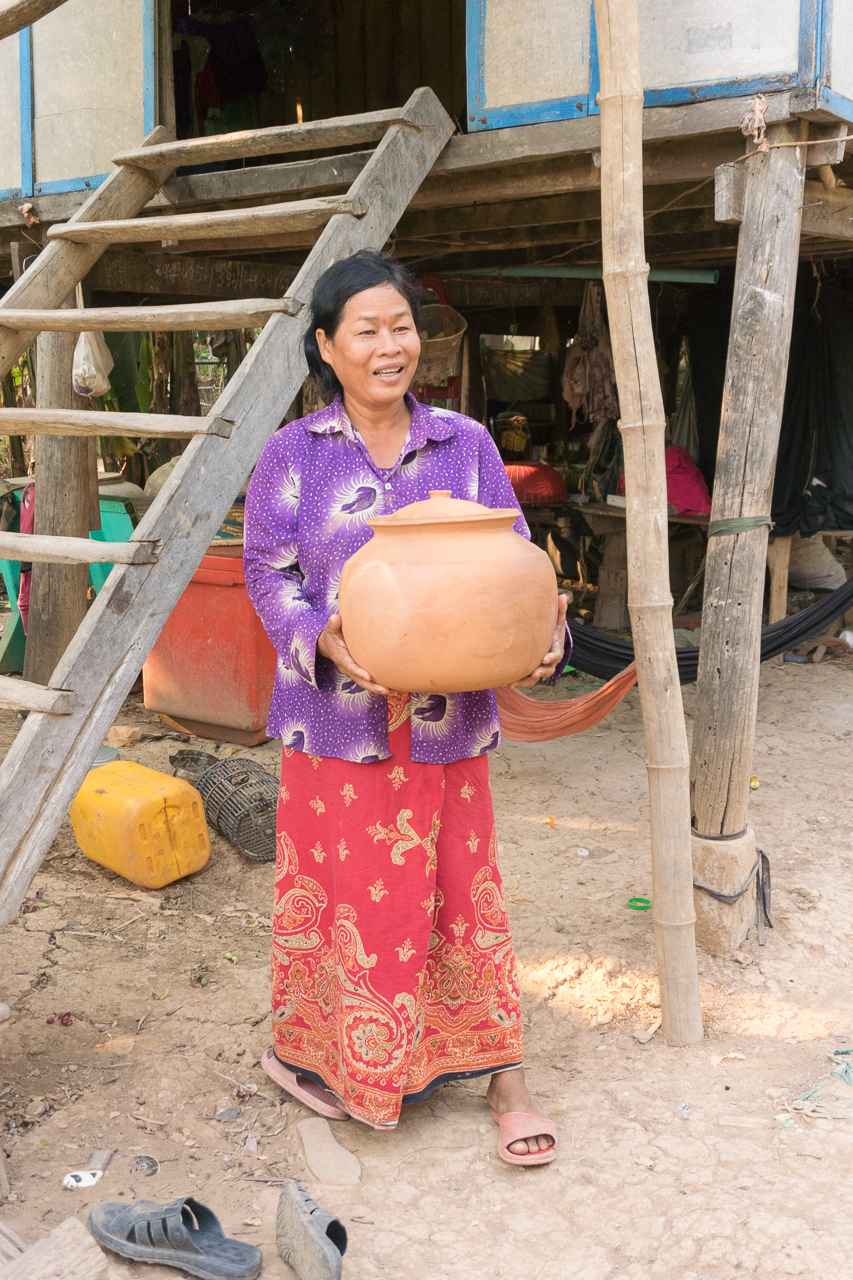 She’d used the loan to buy seeds and equipment, and will rent equipment and hire people to help at harvest time.

We left the riverside in search of another entrepreneur. I didn’t realise at the time, but this was Chenda Yoeurng who was the third entrepreneur I loaned to, back in November 2013, long before we knew about this trip. Chenda was a bit shy, which isn’t surprising given that a group of strangers dressed in cycle gear had suddenly appeared unannounced on his doorstep, and so he directed us to talk to his mother who was working in the field across the road. 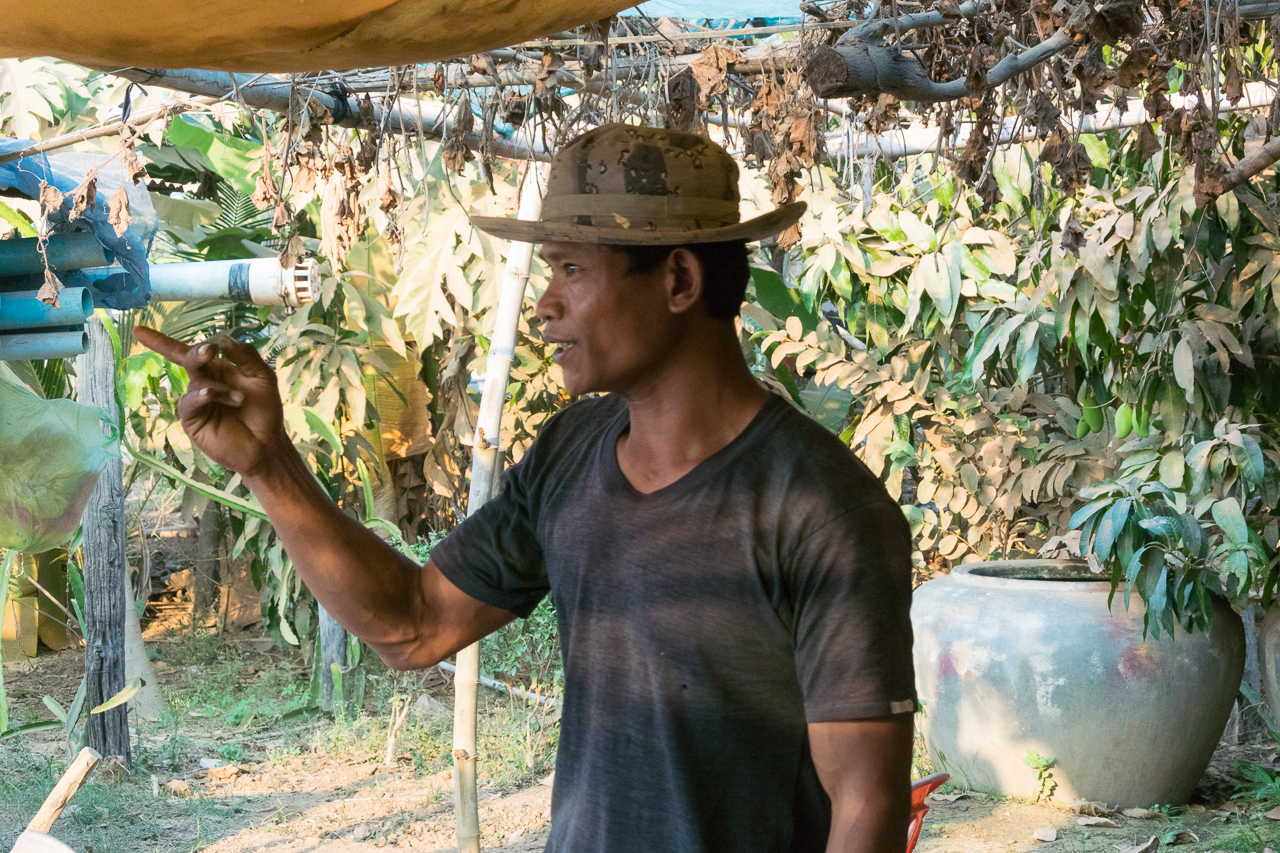 As we walked along the edge of the crops, we saw large sacks of soya beans that had already been harvested, with people crouching down to pick more from the the rows of plants. 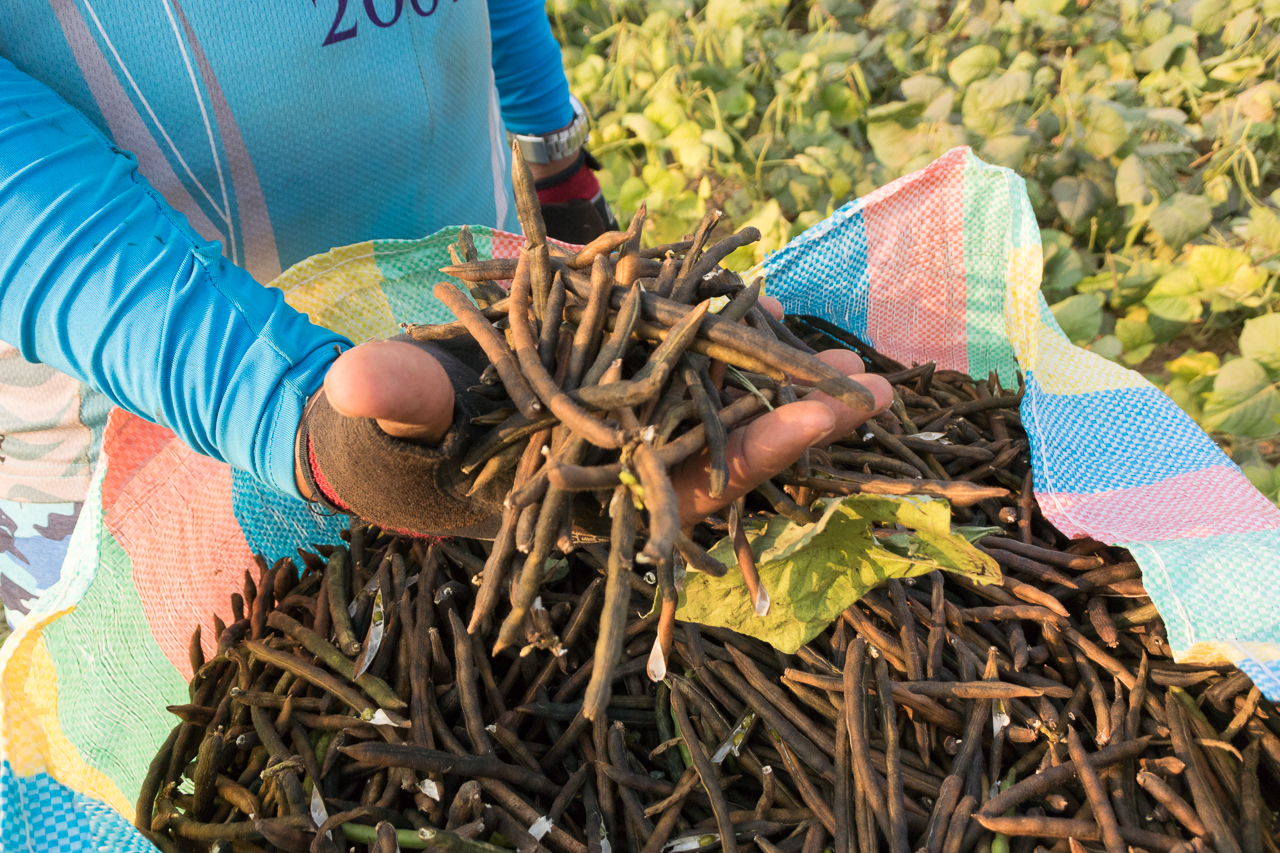 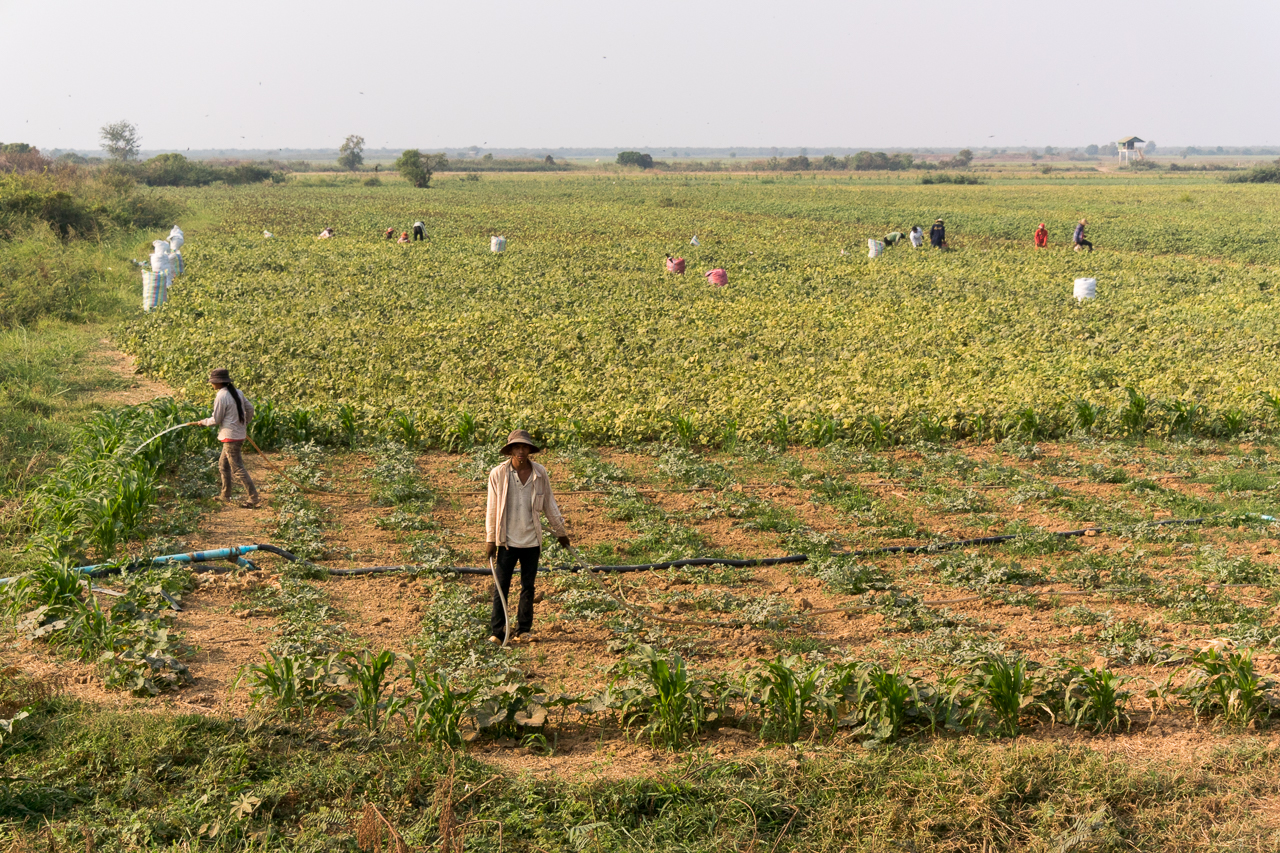 Chenda’s mother saw us approaching and recognising the gentlemen from CCSF came over to greet us with a big smile. 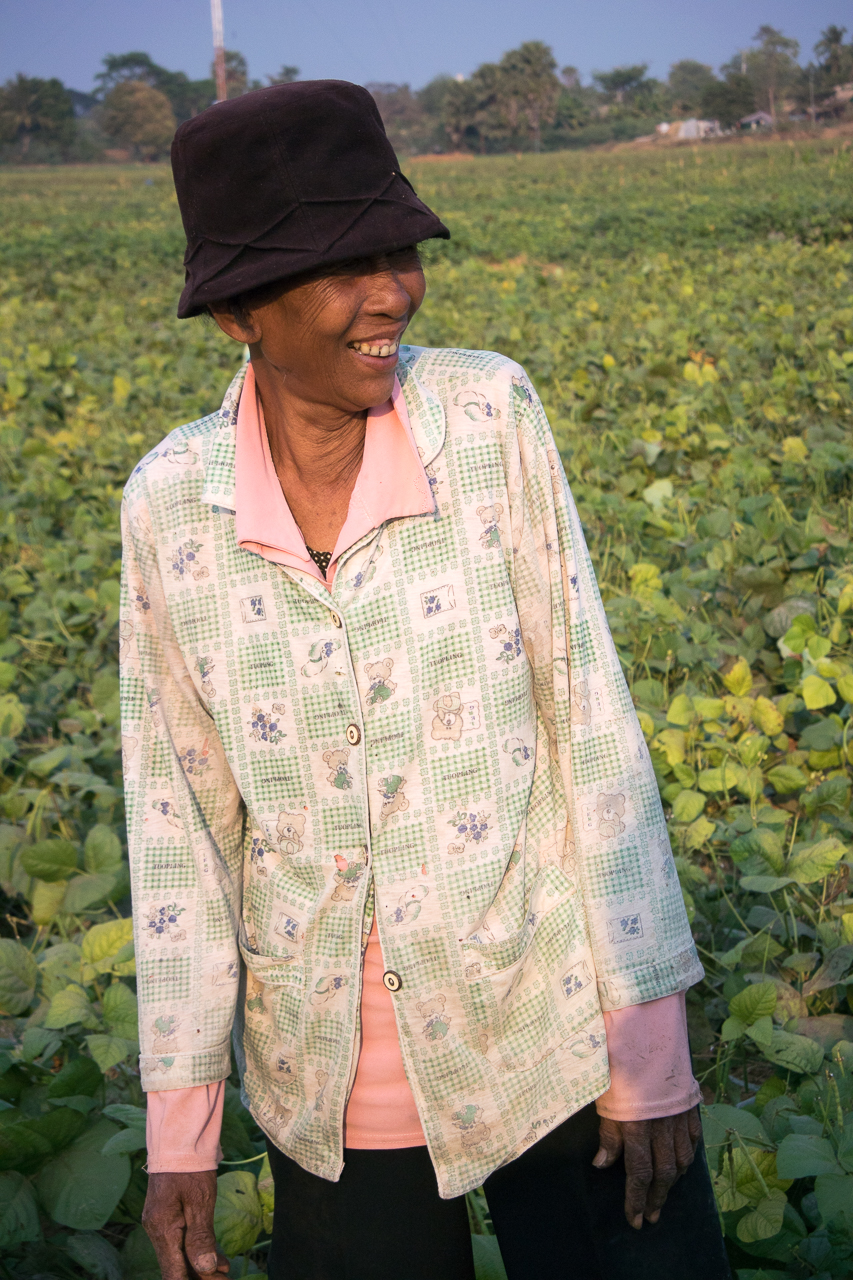 She told us that her children work with her but she also hires people to help harvest the beans and pays them around $6 per day, and they all work from sunrise to sunset. A different section of beans is ready for harvest every two weeks and they’re sold to a dealer who takes them to market, where they’re eventually sold on to be manufactured into soy sauce. She was keen to stress that without the loan from the credit union she wouldn’t have been able to grow such a good crop, and it’s also allowed them to buy another couple of hectares of land nearby helping to increase their income further.

By now it was late afternoon and most of the group opted to hit the road and cycle back to the hotel to cover the miles they needed for their sponsorship targets, but we stayed on with Tracey and Regan to meet one last entrepreneur, Miss Bon Chet, who grows beans and rice on half a hectare of land. Unlike the other entrepreneurs we met she’s single, but has looked after her grandfather since her parents sadly passed away. 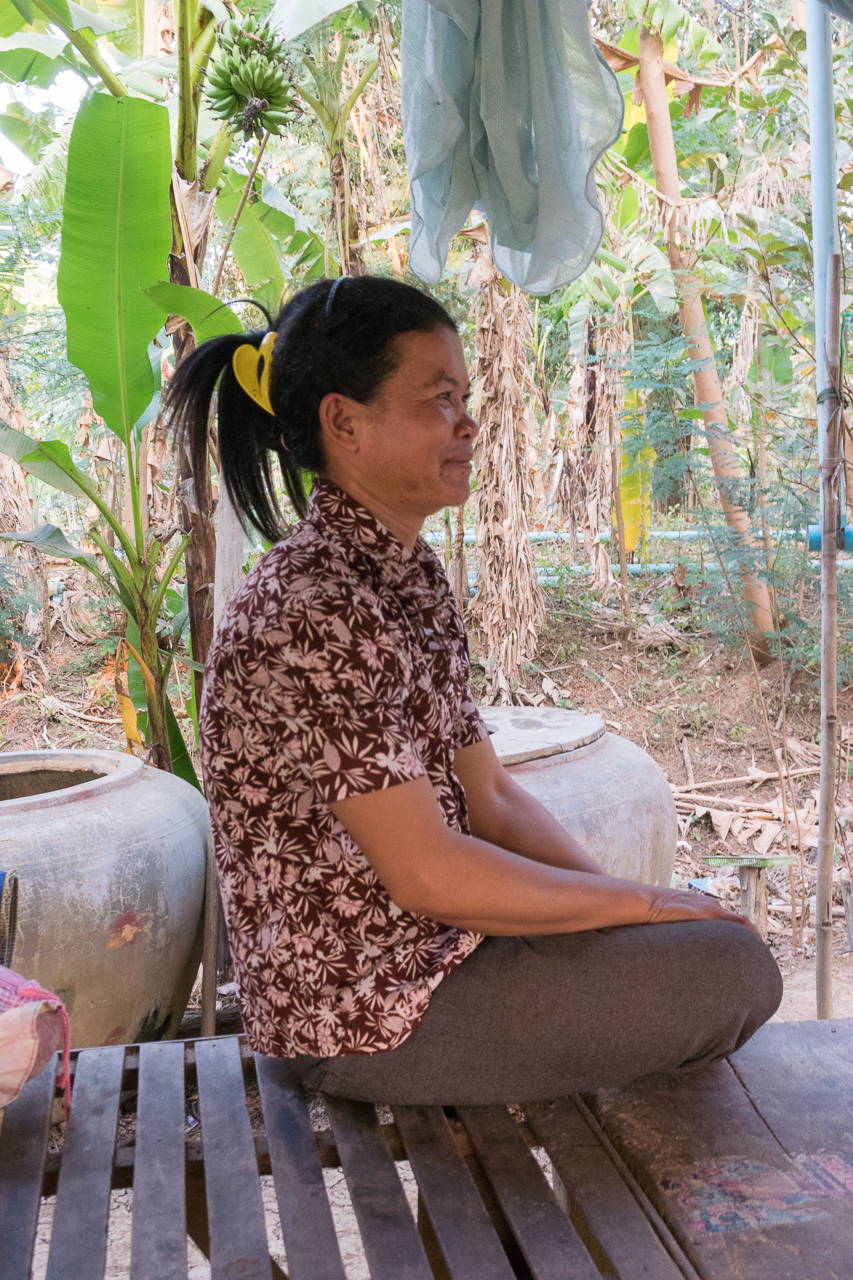 She charmed us all with her smile and made us laugh when she said that she’s doubly happy about her loans; she’s happy when she gets them and happy again when she pays them back!

It was a real privilege to meet the local entrepreneurs and see Lendwithcare in action. All were unhesitatingly positive about the help and support they received and happy to answer all of our questions. As most people didn’t know we were coming, there was no question of our visit being set up or entrepreneurs being prompted to say what we wanted to hear.

One of the great things about being a Lendwithcare lender is getting to choose what schemes you invest in. Seeing these entrepreneurs really brought the process to life and gave us a great insight into the businesses and challenges they face. It also strongly reinforces the positive difference that Lendwithcare makes to individuals, families and communities.

It was particularly special to have met someone whose profile I read over a year ago and which triggered me to make a loan. It was only £15 but along with 78 other lenders doing a similar thing we had a positive impact on the lives of this entrepreneur and his family. Chenda has already repaid more than half of his loan, highlighting that Lendwithcare isn’t really about charitable giving in the traditional sense; it’s about creating opportunities. Helping people to help themselves.