Our last day cycling started with a bus journey to Siem Reap, gateway to the famous temple complex at Angkor Wat. Angkor Wat is a UNESCO world heritage site and its distinctive towers feature on the Cambodian national flag. Surrounded by a wide moat, it was built in the 12th Century and in its time it was the part of the largest city on earth. 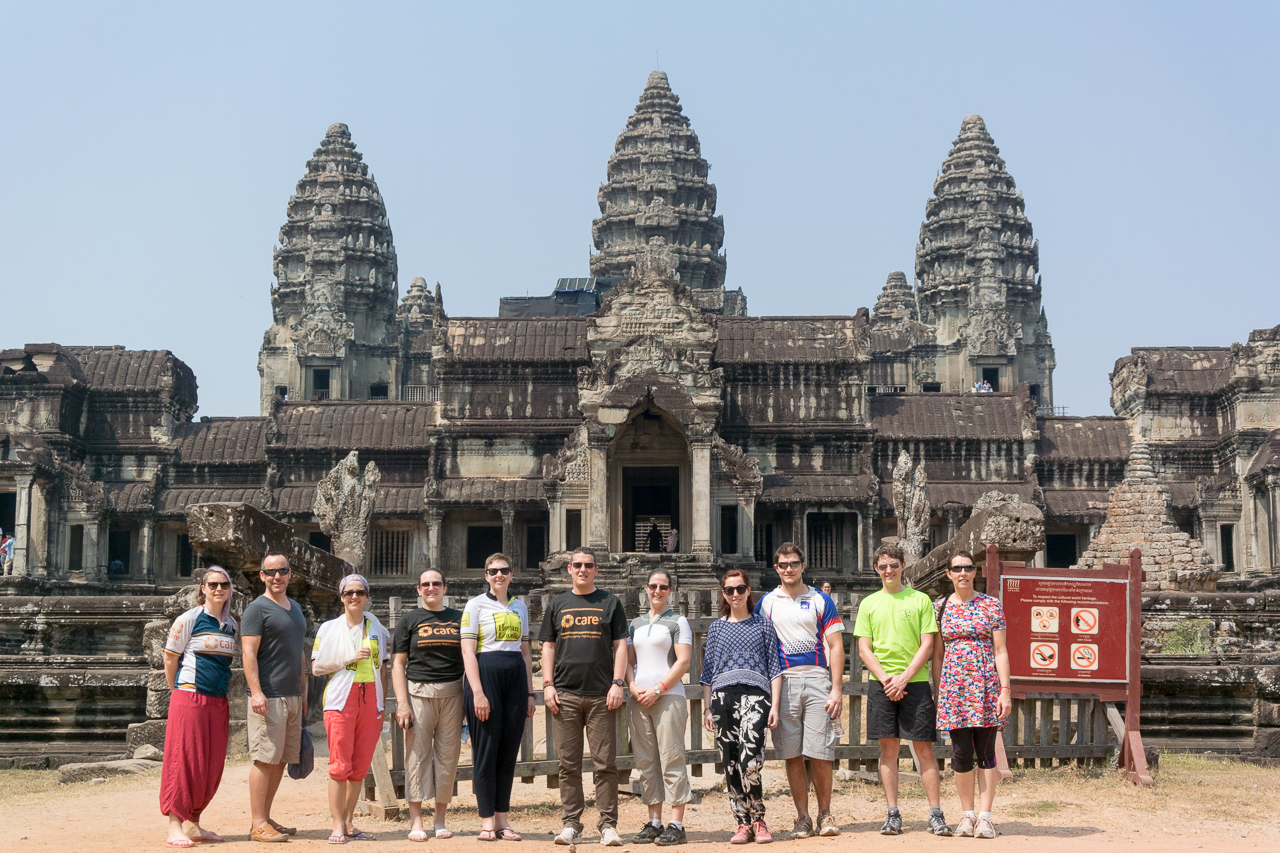 Standing in front of Angkor Wat

It is at once familiar and yet unwordly. Its ancient stones and scale a dramatic contrast to the wood and tin buildings we’d seen on our journey so far.

As we crossed the causeway, our temple guide explained how the construction represents the Hindu vision of the Universe. The central tower represents Mount Meru, the mythical mountain at the centre of the universe. Its five peaks are represented by the five towers and the ocean that makes up the outer universe is represented by the moat.

It felt strange to be walking around among the groups of tourists, after so much time as our own group on the roads. But it was great to be able to explore the stone buildings and admire the beautiful elaborate carvings that adorned the walls and showed scenes of life in ancient Cambodia. 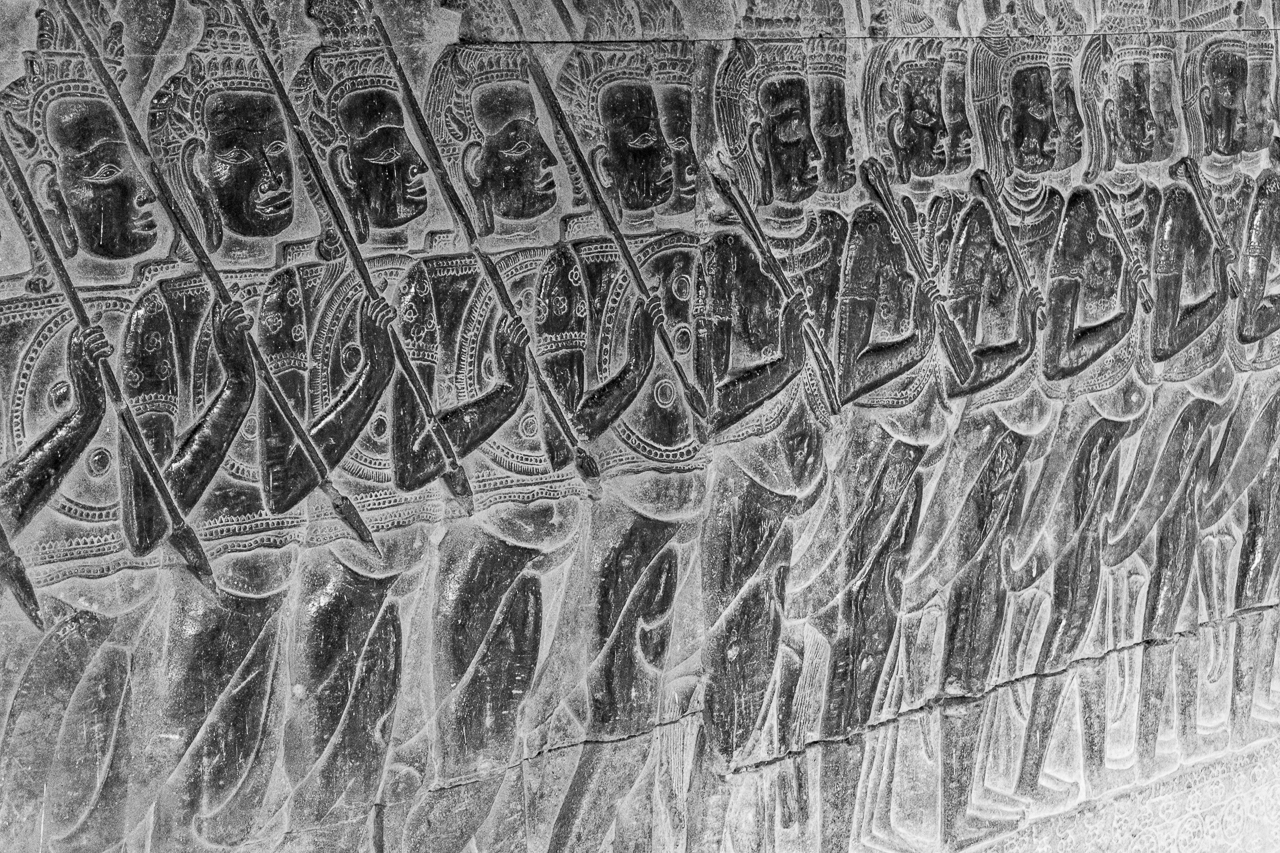 Carvings on the walls of Angkor Wat

We had lunch in a cafe just behind Angkor Wat and got back on our bikes for a short ride to our next stop, the Bayon temple. This is remarkable for the carved stone faces that look out in all four directions from its many towers. The serene faces smile out over the jungle setting. 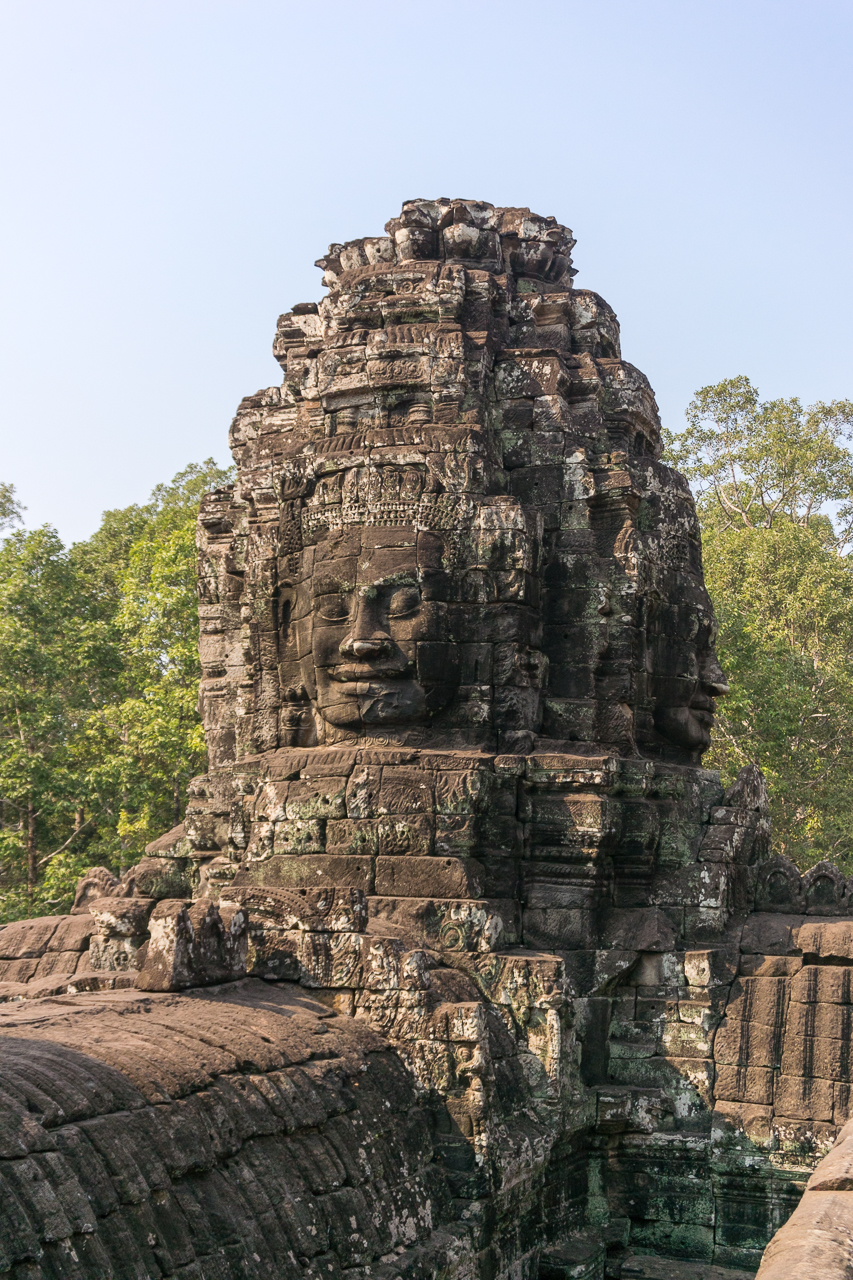 Faces at the Bayon Temple

We had some fun taking group photos in the stone galleries, and our guide had trouble keeping us together. But eventually we all made it back to our bikes for the ride to the last temple of the day, Ta Prohm.

The paths on the way there were little more than tracks in the sandy ground and there were moments when we felt the wheels sliding beneath us as we made our way through the dense undergrowth. Getting away from the tourists and the minibuses, made it feel like a real adventure, exploring some long forgotten land.

Ta Prohm is arguably the most dramatic and photogenic of the three temples we visited. Abandoned centuries ago, the jungle has reclaimed its territory here, and huge trees throw their roots over the stones, like monsters about to crush them in their claws. 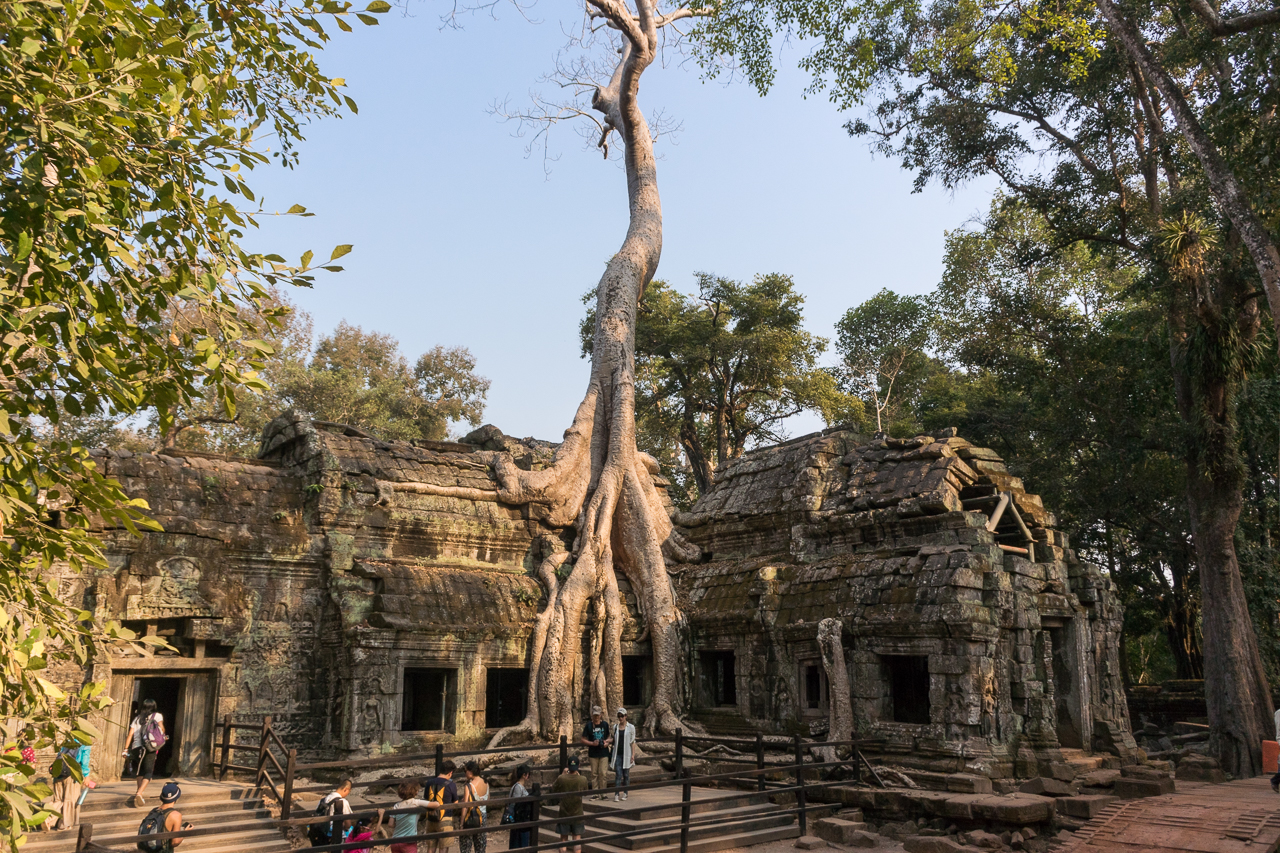 It looks like a film set. As we entered the outer courtyard, we were reminded of King Louie’s hideout from the Jungle Book. But if you’ve seen the first Tomb Raider movie, you’d definitely recognise it. Our guide told us that Angelina Jolie and the crew spent 8 days filming in this location, starting very early in the morning each day.

The semi ruined temple, possessed by the twisted roots and branches of the huge trees, make a dramatic backdrop. And for me, its beauty was enhanced because it was both broken and held together by natural forces.

In parts there were just heaps of rubble and broken stones, but some sections have been restored, pieced together like a complex jigsaw puzzle.

We had a lot of fun peering round corners into shadowy doorways here. It felt like the scene of adventures and stories, and it was hard to keep us moving on. 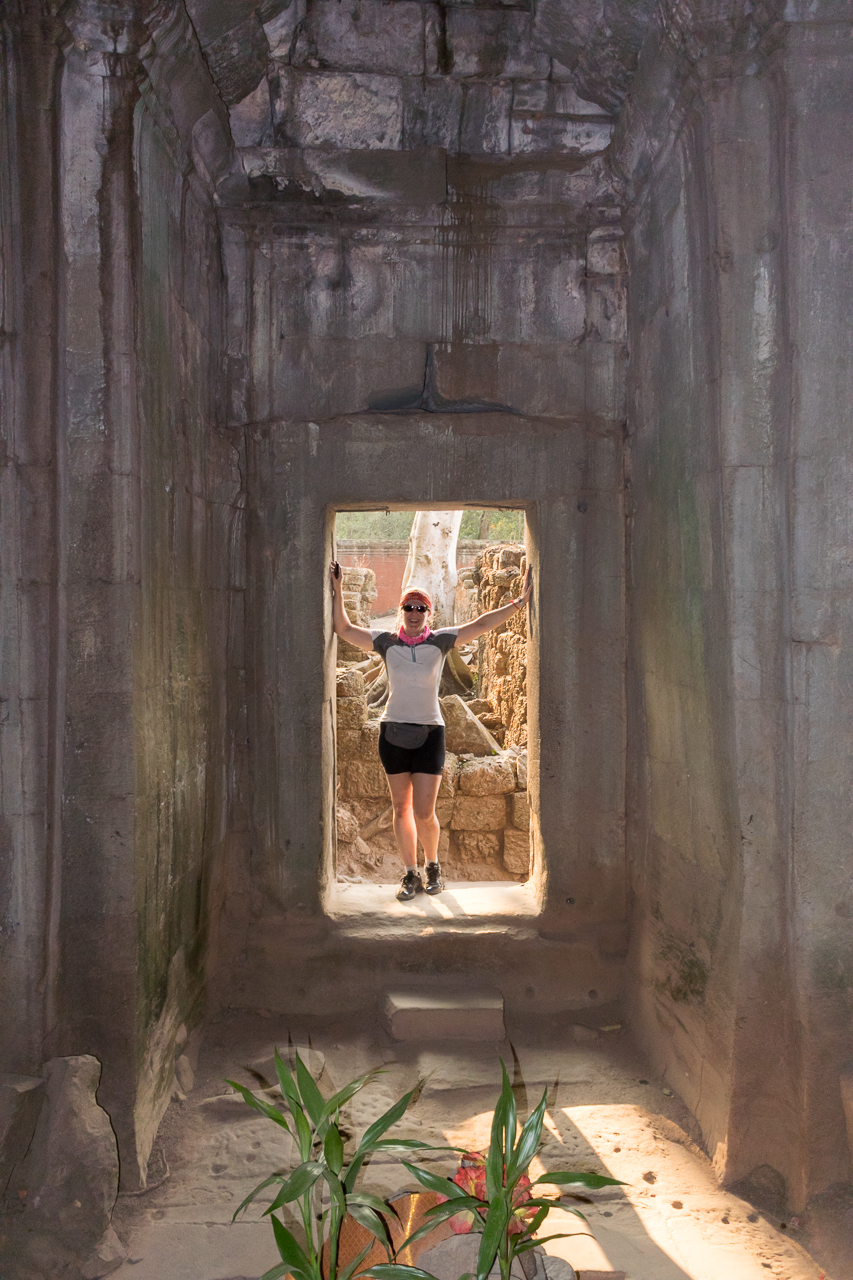 But the afternoon was drawing on and we still had 10 miles to go to finish our epic ride. Once more onto the forest tracks in single file, we passed between a few small dwellings, simple huts woven out of jungle materials.

It was quite a dramatic change as we came to the busy main road as we cycled towards the city of Siem Reap. The traffic really was crazy here, with scooters, cars and bicycles travelling three or more abreast. But by now we’d got our confidence and went with the flow, laughing at the craziness and eventually all cruising up to the front of our hotel, all in one piece.

And that was the end of our ride. Our bikes were dismantled and packed up onto the truck for the last time.

We posed for photos, congratulated each other and Kathryn awarded us with medals for making it to the finish. There was a huge sense of achievement and celebration with a touch of sadness that this amazing experience was about to come to an end. 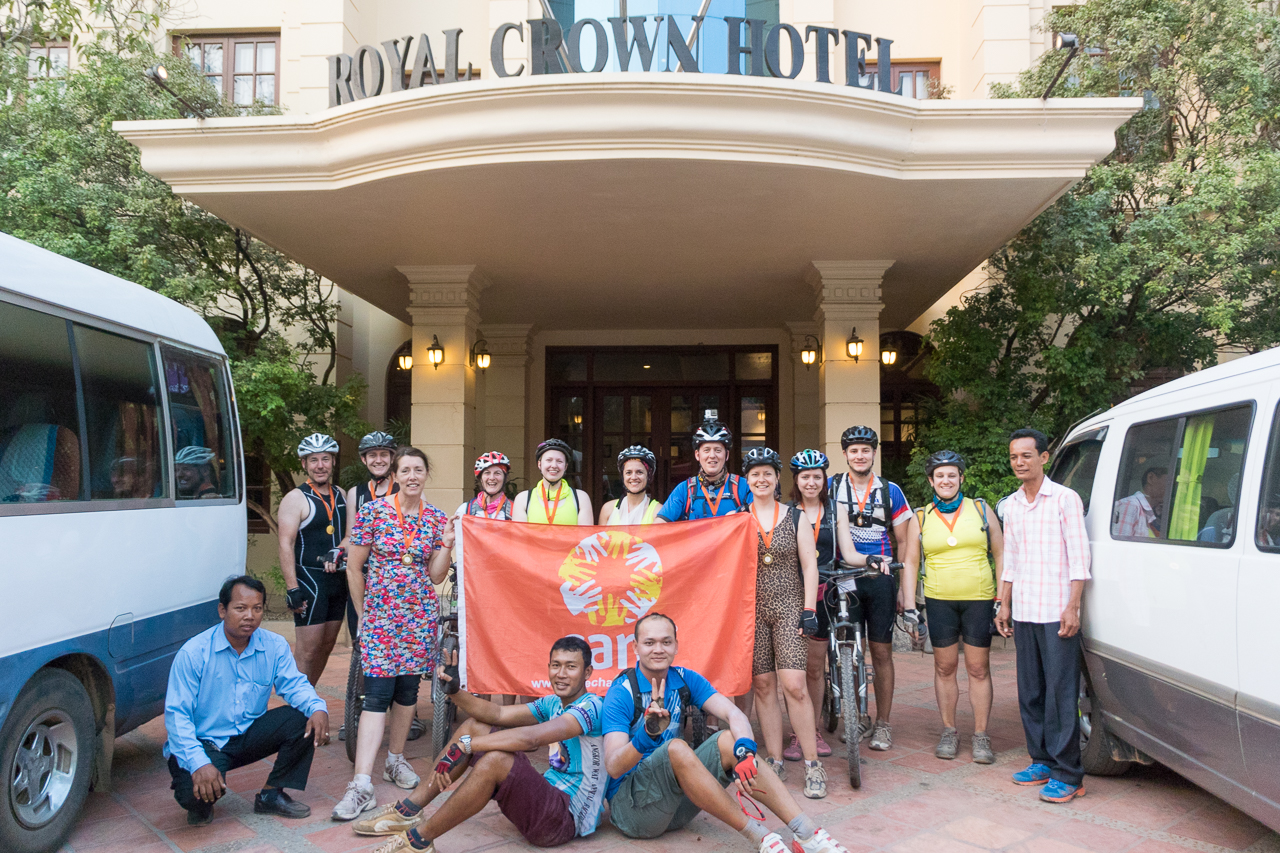 We made it last a little longer, with a fine celebratory dinner at a local restaurant, where we thanked our guides and drivers, and Kathryn and Tracey summed up an amazing few days. Everyone got a special certificate recognising their unique contribution to the group.

Siem Reap really comes alive after dark and our celebrations continued into the night. Drinks on Pub Street; a game of table football beneath a skate ramp on the roof of a bar; and a tuk-tuk ride to a rather dodgy looking karaoke bar. It was another memorable night and a fun way to bring our adventure to an end.

You can see in the photo above that I was wearing a GoPro camera on my cycling helmet. The following is a video of the footage I captured during the trip.