We left the hotel at 7am to catch our chartered boat to Phnom Penh. We were sad to say goodbye to Phat and Hai who had looked after us so well for the last few days. 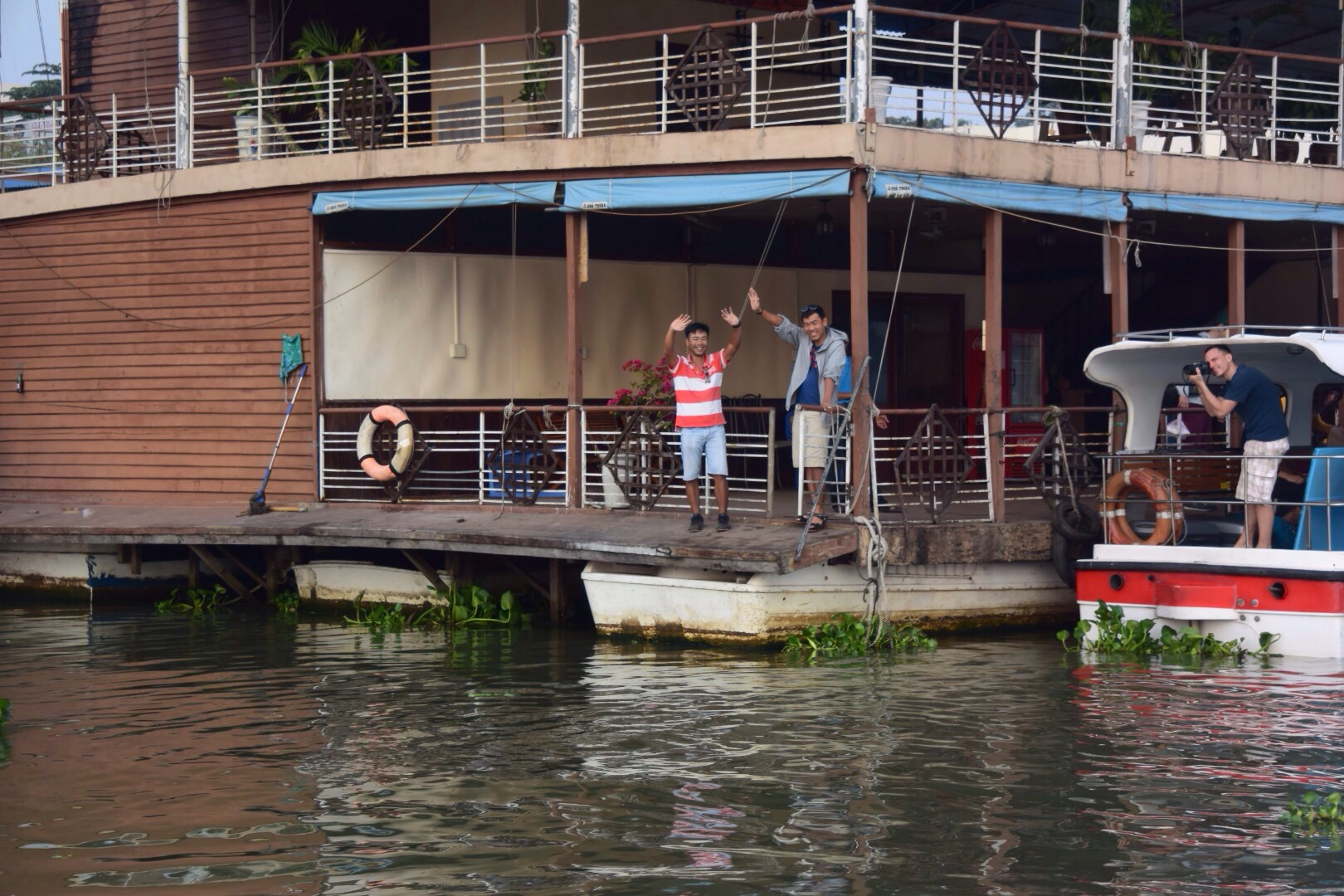 We had the boat to ourselves so it was nice to be able to stretch out and take in some of the scenery along the banks of the Mekong River. The wide open expanse of the river gave a different perspective from the narrow roads and paths we’d been following on our bikes. 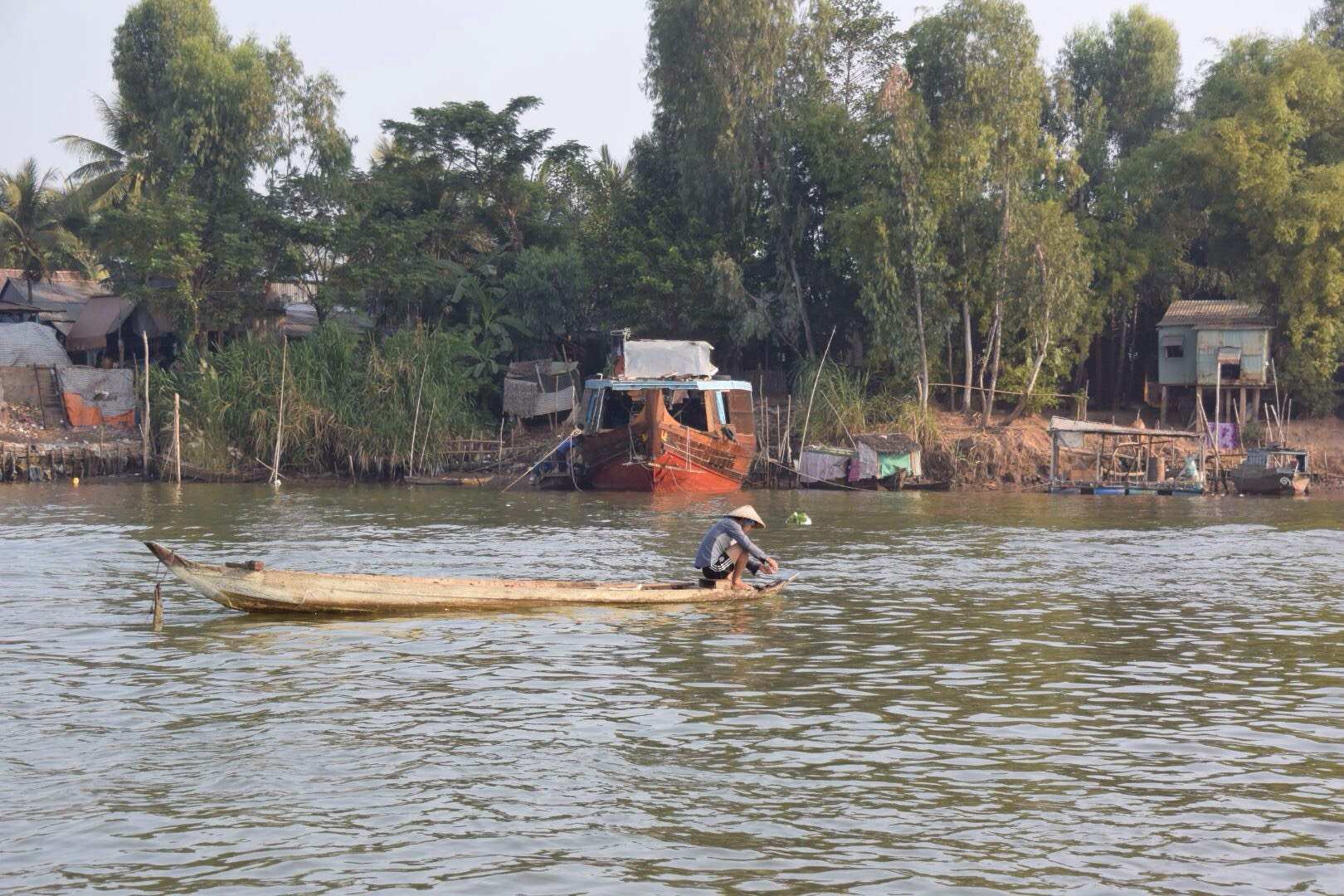 After about an hour on the boat we reached the Cambodian border where we had to disembark. Phat and Hai had sent our passports on ahead of us to expedite the Cambodian visa application process. We sat in a cafe-come-waiting room whilst the paperwork was being sorted where a local soap opera was airing on the TV. We all became quite engrossed at the drama being played out, where a wedding appeared to be going horribly wrong with guns being drawn. It was never like that for Scott and Charlene!

After about 15 minutes we were called back to our boat where we spent another 4 hours sailing up the Mekong. This was a chance to catch up on some sleep after the previous late night and also a bit of blogging that the last few long days hadn’t permitted.

Eventually we started to see Phnom Penh in the distance, and as we got closer tall buildings seemed quite alien after the last few days. Coming in by boat was an amazing way to arrive in the city. 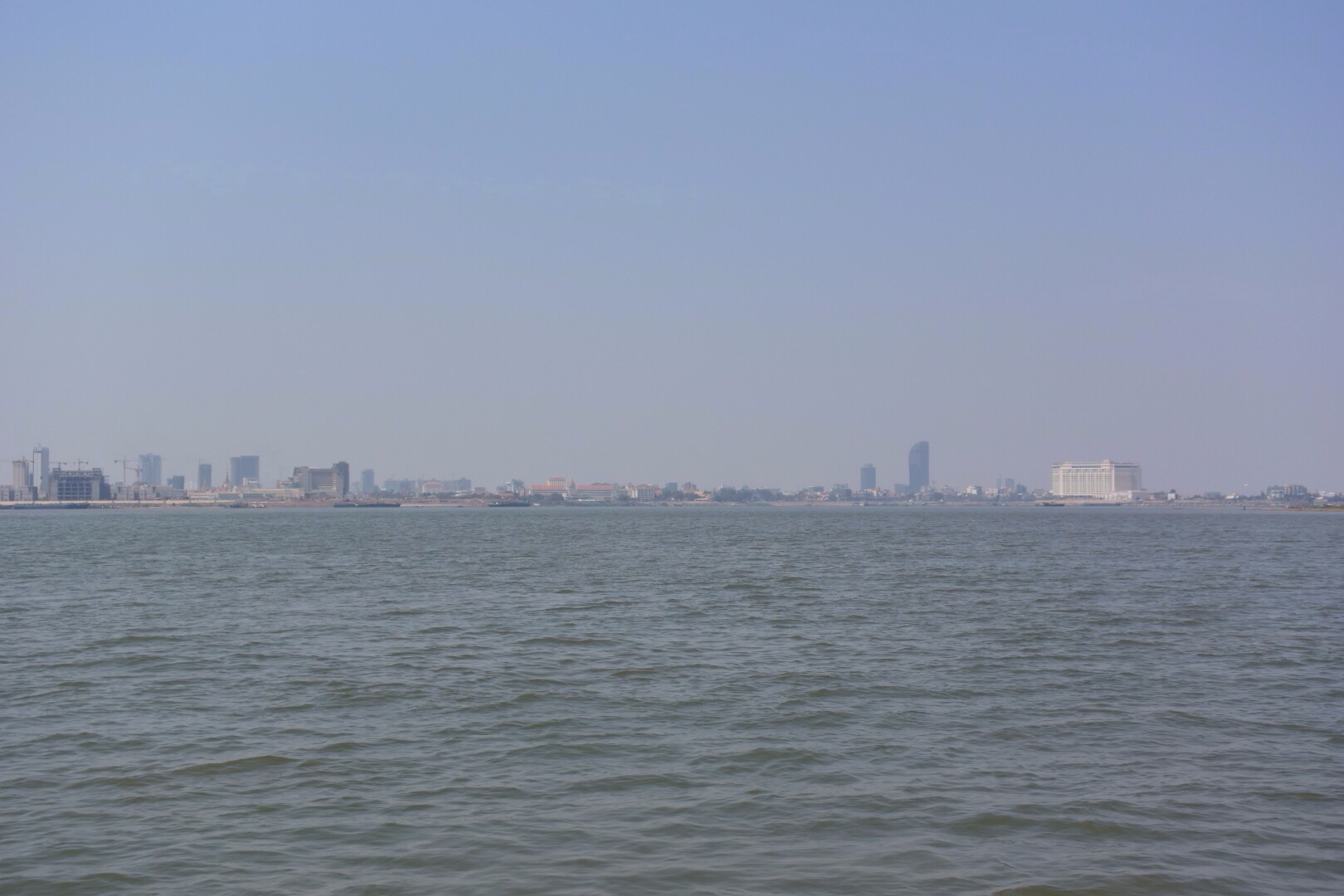 We met our guides, Tree and Veng, who gave us an introduction to Phnom Penh as we made our way to the Foreign Correspondents Club for lunch. The airy, French colonial style setting was a huge contrast to our recent local lunches in road-side snack stops, but the food was just as tasty and the cocktails were well received. This is where many of the foreign correspondents used to hang out during the war, and it was from here that the fall of Pol Pot was first reported. So it was like stepping back in time.

After lunch we headed into the city for some sight seeing. We were transported in style by rickshaw. It was nice, but rather odd to have someone else pedalling for a change. 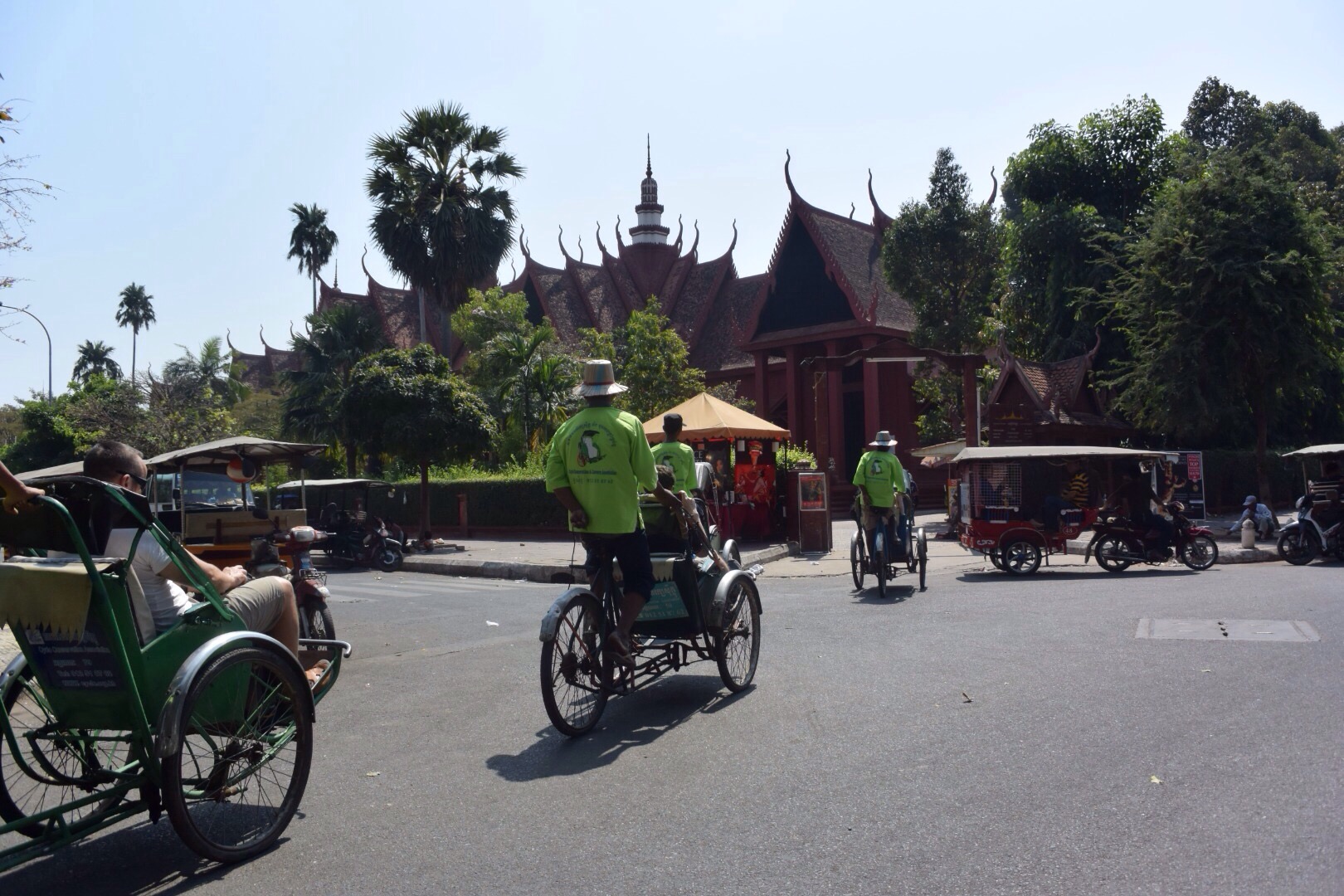 Our first stop was the National Museum where we had a short guided tour. All the artefacts here were dispersed during the war and many were damaged or destroyed, but now there are over 1,000 objects on display.

Our guide showed us several statues that demonstrated different influences over time. Some of the figures were very slim and carved very smoothly, rather like Greek or Roman statues. Others showed more decoration, and showed fuller figures and smiling faces, representing happiness and prosperity in Cambodia.

Our next stop was the Royal Palace nearby, with a blue flag flying over the royal residence, showing that the king was at home. We explored several richly decorated and lavish buildings here, full of gold statues, including a 92kg solid gold standing Buddha and another carved from emerald. 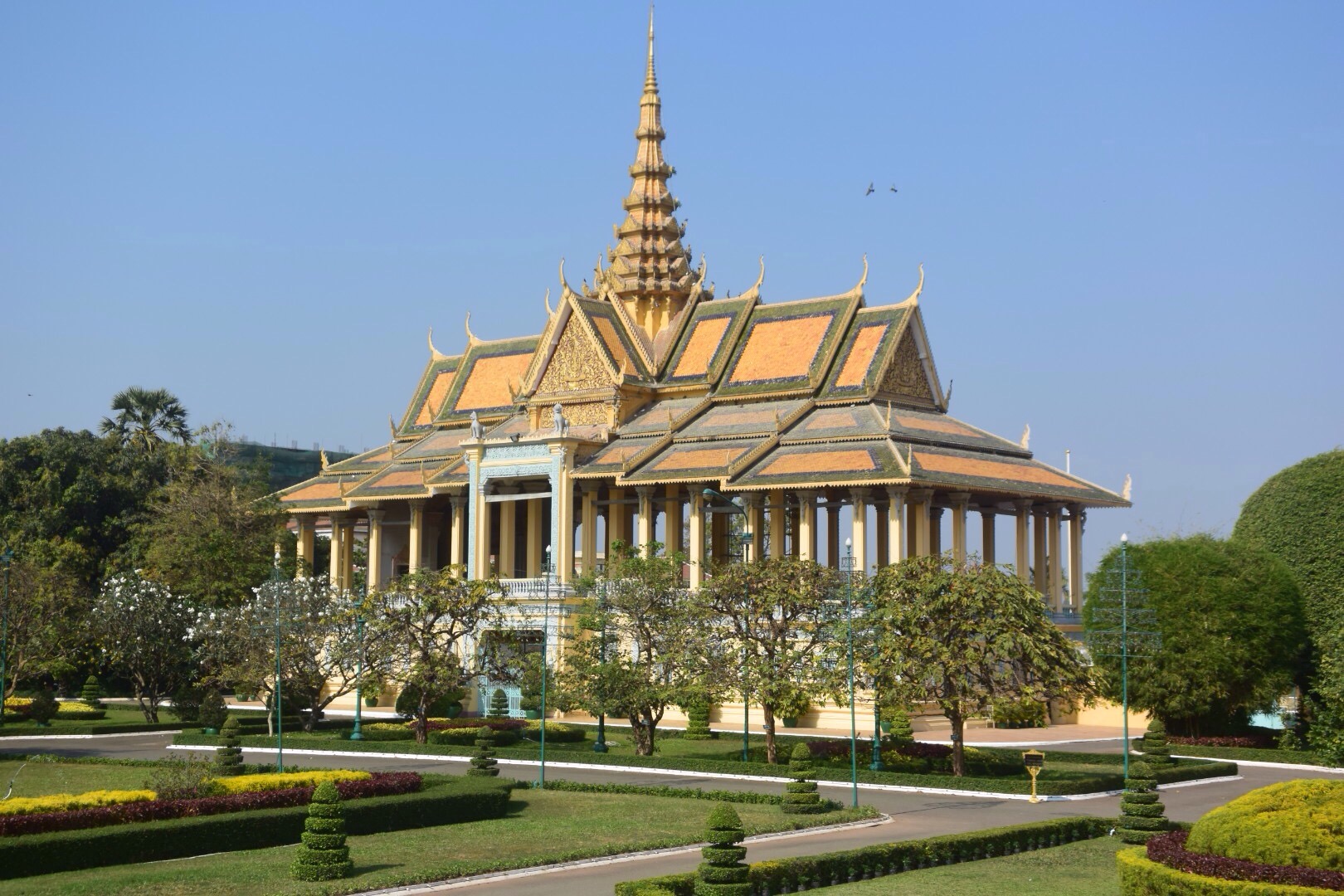 Our final stop was rather more sombre and far less ostentatious, as we paid a visit to S21, a former school that was used as a prison during the era of Pol Pot. The camp rules, posted on a board in the courtyard, included the instruction not to cry out when being electrocuted, and the whole atmosphere was chilling.

To hear and see photos of the systematic torture and destruction of families and communities, all within recent, living memory was a stark reminder that human beings can be capable of some terrible things.

This was brought further into focus when we met Chum Mey, one of only seven survivors from the tens of thousands that passed through S21. He didn’t escape the torture but did avoid the killing fields because he was a mechanic by trade and was able to use his skills to repair the typewriters of his captors. Tears were filling his eyes as he recounted his time in S21, and how his family weren’t as fortunate. They filled mine too.