This was the day that nearly broke Gary and I, mentally and physically. It was to be our first day cycling in Cambodia, and a rather different environment from what we’d encountered in Vietnam.

We started at 07:30 with a minibus ride out of the city, picking up our packed lunches from the restaurant where we’d eaten the night before and passing through a local market. We stopped in the grounds of a temple where Tree and Veng helped set up our bikes. These didn’t look quite so new and shiny as the bikes we’d had in Vietnam, and the chains and cogs appeared rusty. But, as we soon discovered, this was down to the red dust roads, rather than a lack of maintenance. 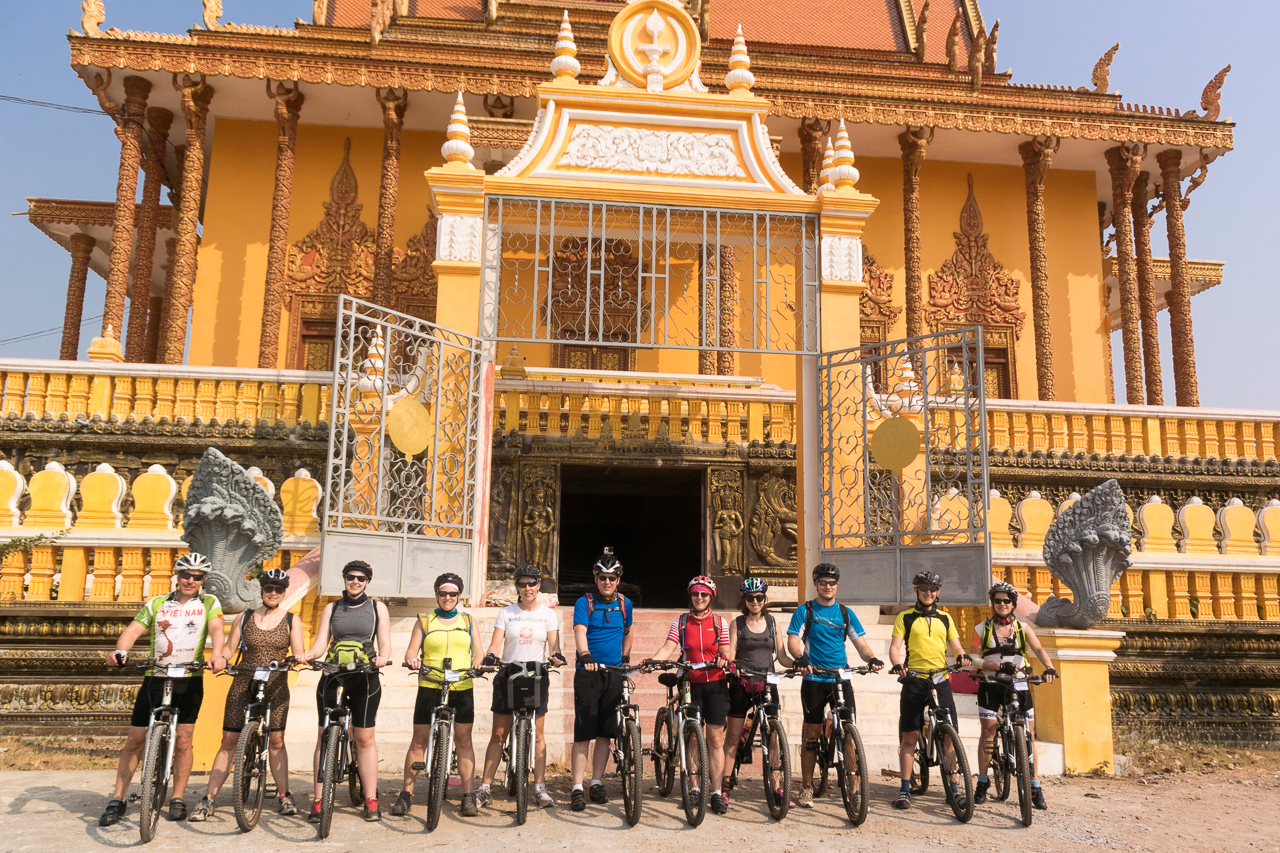 Setting off in Cambodia

With only a few minutes to test out our new transport, we were off and straight onto a busy main road. The scooters and cycles of the past few days were replaced by cars, trucks and massive lorries and the road surface changed from tarmac to gravel at regular intervals. It was a stressful introduction to our new bikes and a relief to turn off onto the quieter local roads.

Once again, there was a big contrast to Vietnam. Unlike the lush coconut and banana plantations we’d cycled through, here everything seemed drier, and we kicked up a fine layer of red dust as we travelled along the long straight roads. We saw the vivid green of the paddy fields, but fewer other crops and trees to provide the welcome shade we’d enjoyed in the Mekong Delta. We still got shouts and waves from the children and villagers as we passed by though. 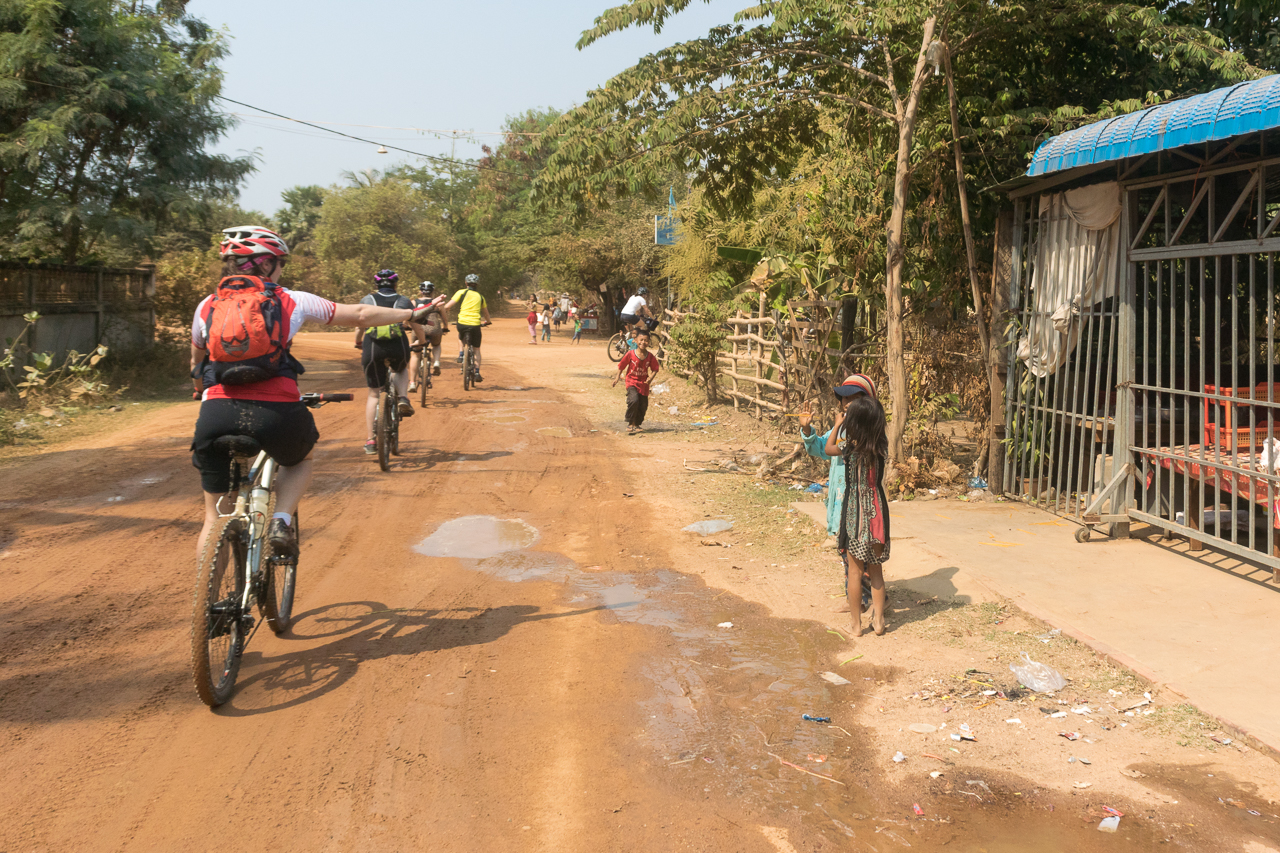 Shouts of “Hello” and waves greeted us everywhere

And instead of dodging scooters and bikes, we found ourselves cycling through a herd of water buffalo. These beautiful animals paid us little attention, their faces soft and serene as we cycled through.

Our first stop was at a Buddhist temple, a perfect place to calm frayed nerves and take stock of our new environment. There were many stone statues of the Hindu and Buddhist gods in the outer courtyard, many of which depicted figures riding on animals, including a rat, a tiger and a hare.

In the temple itself, we all received a blessing from a monk dressed in traditional orange robes. He tied a red cord around our wrists and wished us a safe journey.

We had a good distance to travel to day, with the original plan for 70km increased to 90km. So we pushed on over the dusty roads, climbing a little as we reached our lunch stop, at the foot of a hill with a grand building at the top. 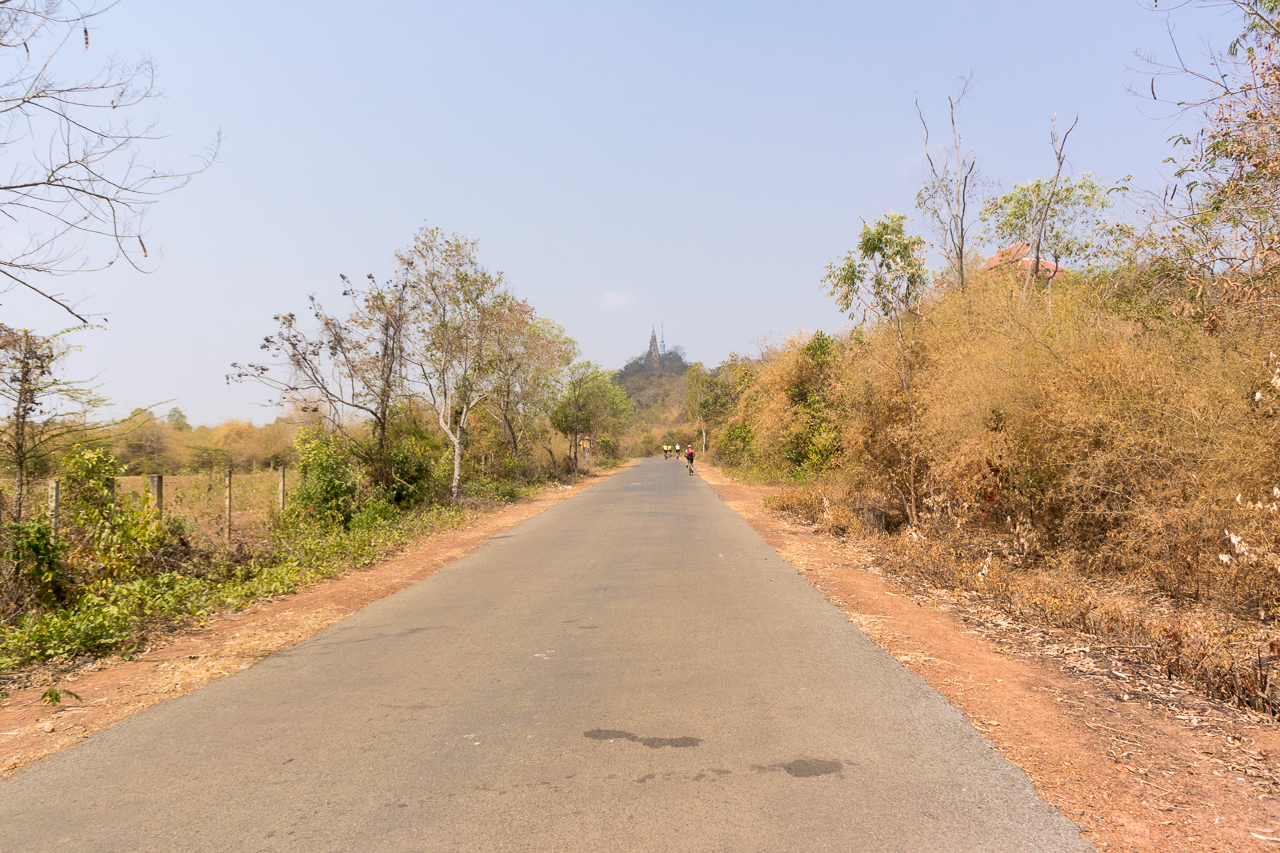 Our lunchtime destination in the distance

As we sat in a shady enclosure, equipped with hammocks, and opened the palm leaf boxes that contained our lunch,  the local children came and spoke to us, in perfect English. At first, I thought they were just asking a list of questions by rote, but it soon became clear that actually they understood our replies too, and we were able to ask them about school and their ambitions. They obviously have plenty of tourists to practice on. 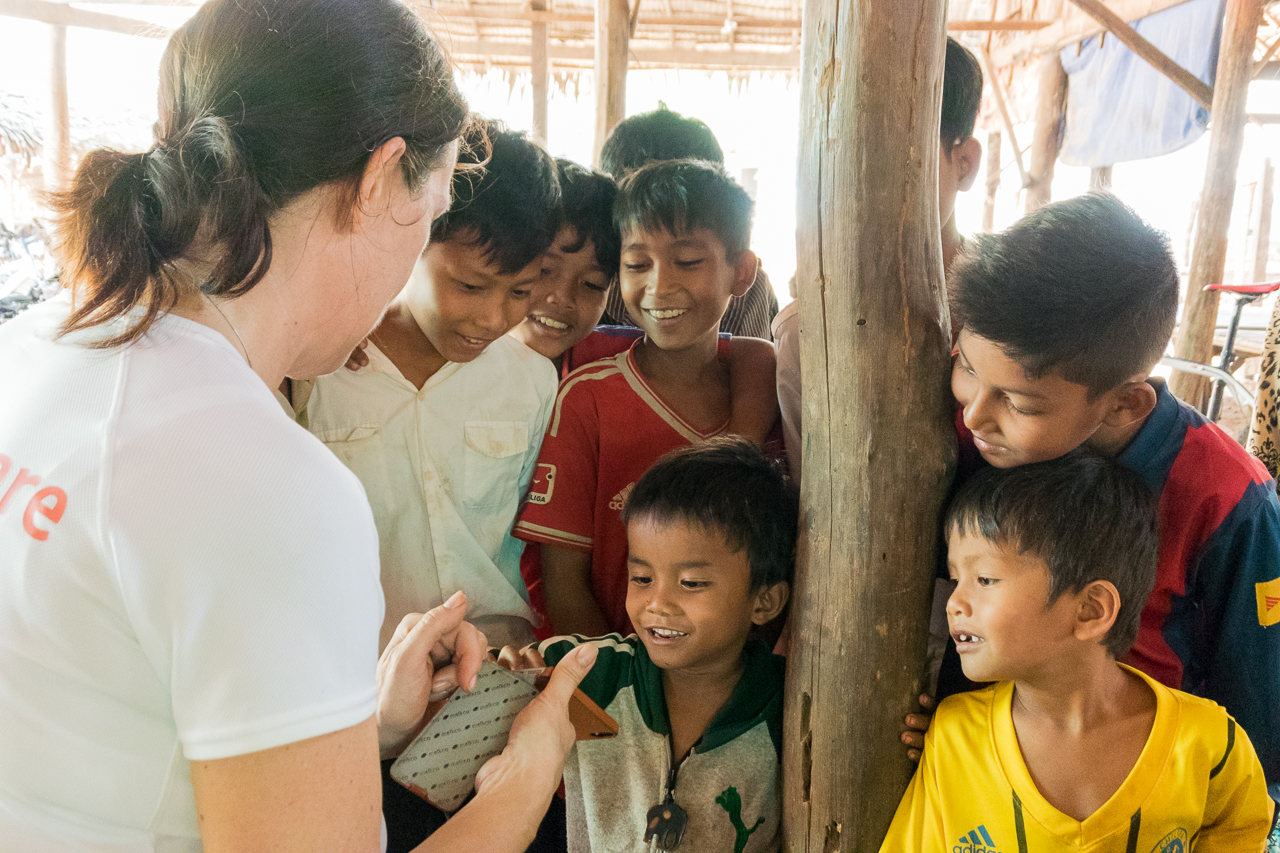 Tree found us a local delicacy to try alongside our rice, fish, meat skewers and fruit. We’d never eaten ants before, but seasoned with salt, pepper and chilli, they were quite tasty. 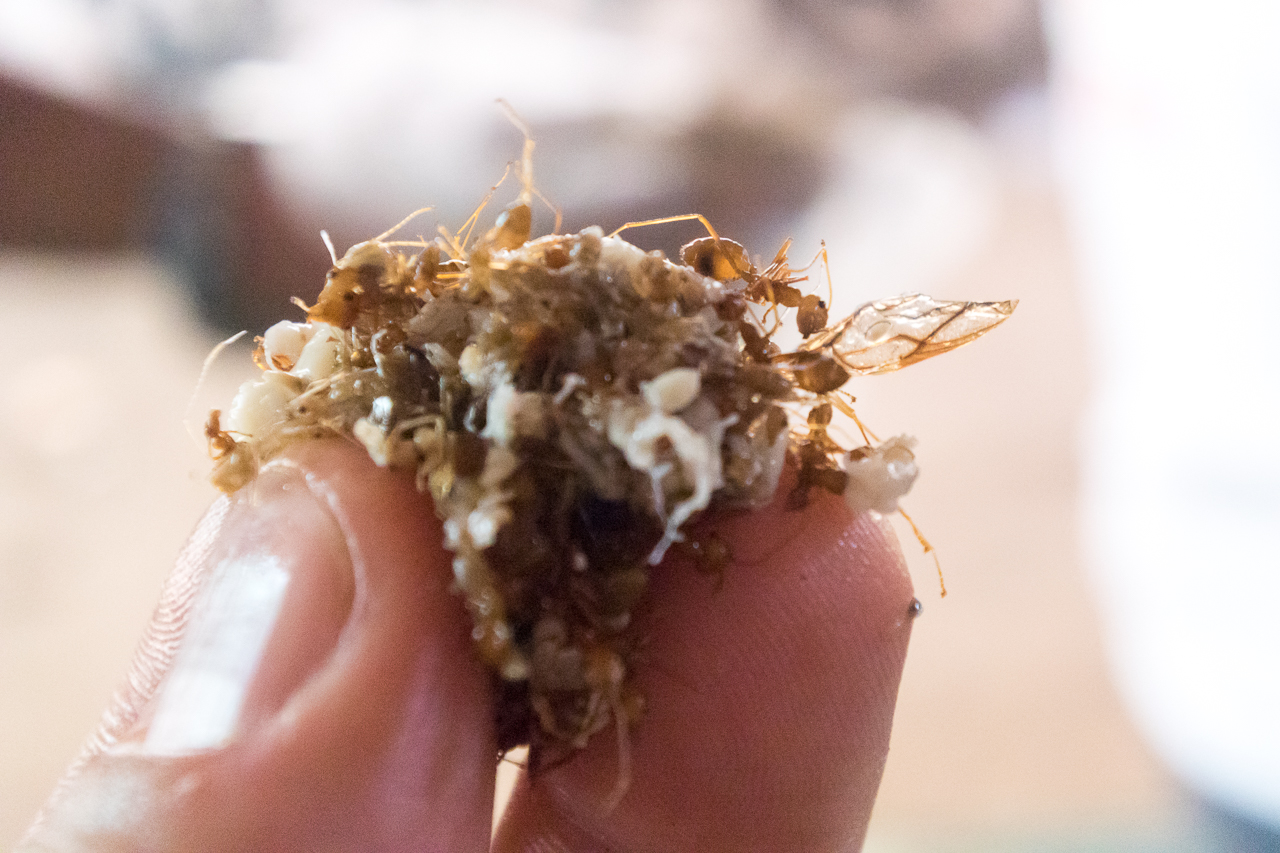 After lunch, we climbed up to the top of the hill to see the tomb or stupa, where the ashes of the Kings of Cambodia are interred. As if our legs weren’t working hard enough on the bikes, we had to tackle 509 steps to reach the summit, but the views over the surrounding area were worth it. 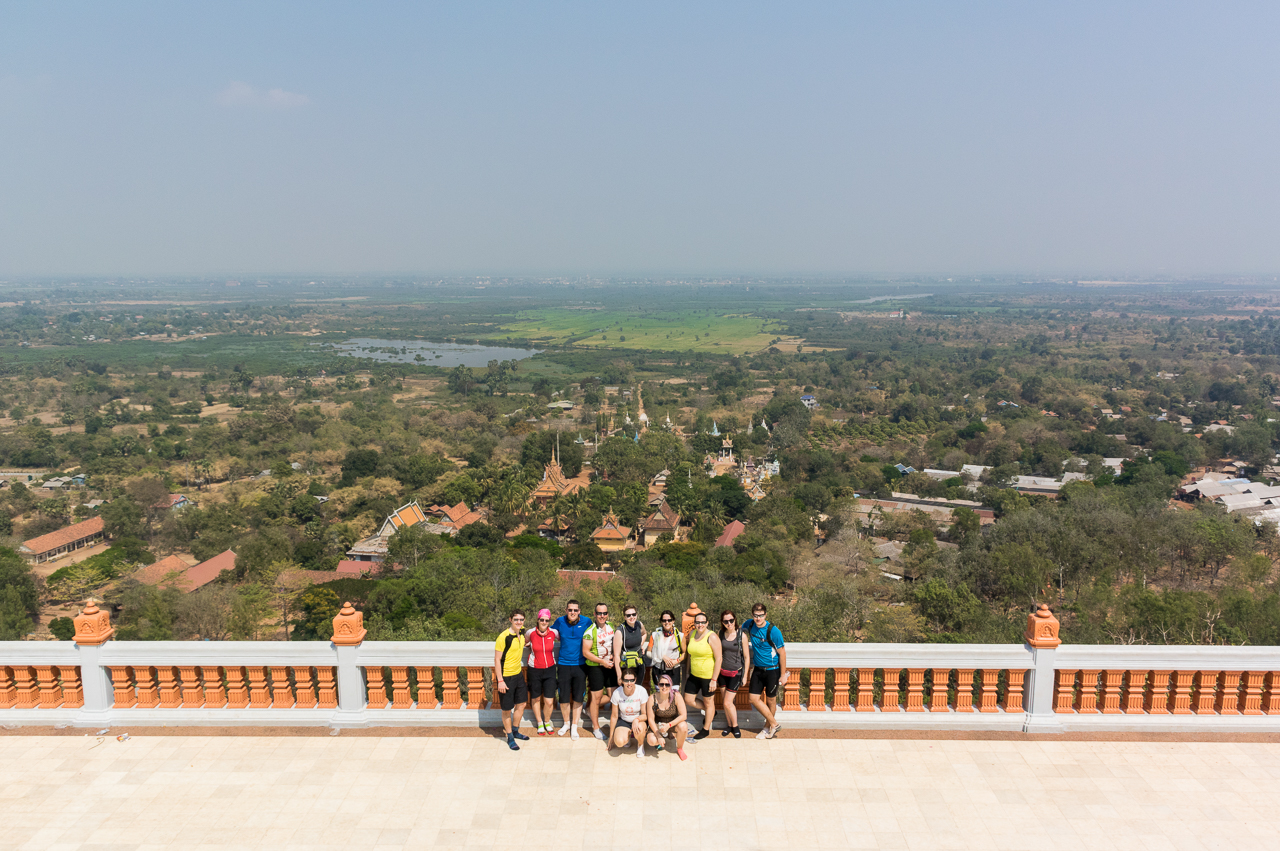 Back down to the bikes, and the temperatures had risen to 42°C and we had another 20 mile stretch to complete before our next stop. The heat coming down from the sun and radiating up from the red dust road was relentless, and there was nothing in the way of shade.

I really started to feel the effort and dropped to the back of the group, struggling to keep up the pace, and seeing the distance between me and the rider in front increasing until they were well out of sight. It became something of a mental battle after that.

I felt like I was getting more out of breath than I should have been for the effort I was making. I went through a mental checklist of my body, and came to the conclusion that I was likely in danger of over-heating, if I tried to push on any harder. So I decided not to chase the pack, but eased back the effort even further to bring my heart rate down and to keep on going at my own pace. 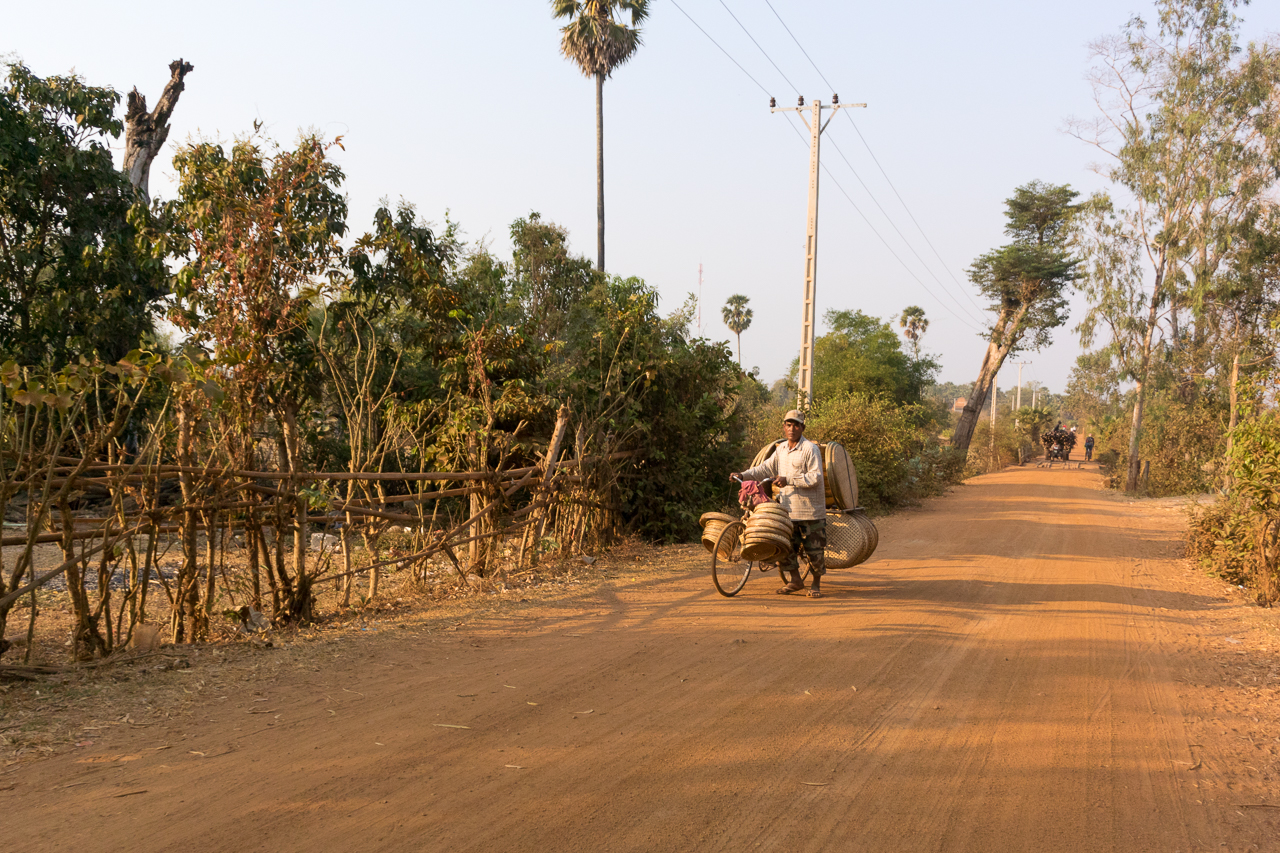 After what felt like a good half hour, I caught up with the group at a crossroads, and Doctor Alex gave me a spray down with some cool water, which definitely helped as we pushed on to the next rest stop. Here Regan and Tree tried another local delicacy – a boiled, fertilised duck egg. 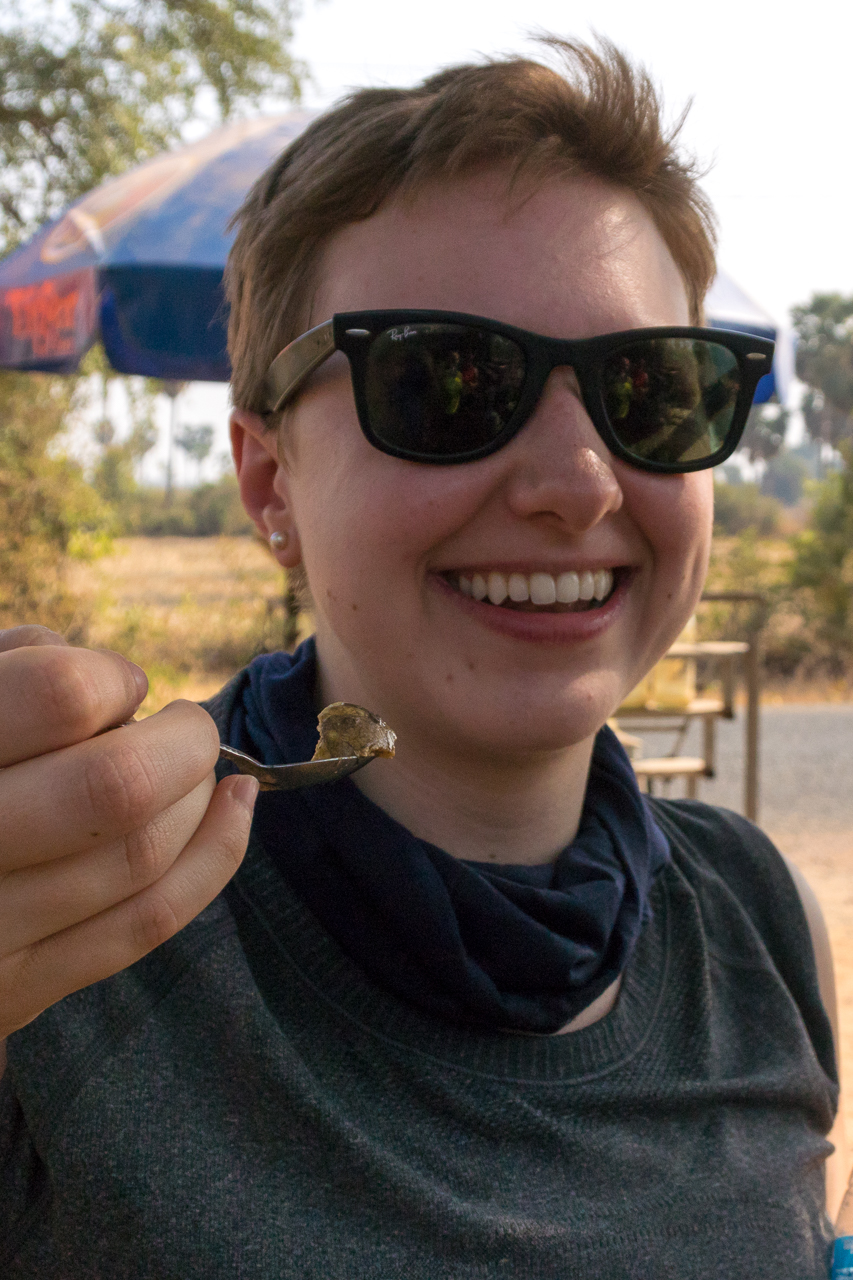 The heat remained a tough challenge through the rest of the afternoon’s cycling. It’s the dry season and the ground is cracked and dusty. But the  houses on tall stilts by the sides of the roads show just how dramatically the landscape changes when the rain and floods come in the wet season.

After the last short refreshment stop, the final stretch was a tarmac road where we were able to pick up and sustain a good burst of speed for a few miles. As the light began to fade, we ended our cycling day in a busy village and caught the bus back to our hotel, more than ready to rinse off the dust, and sweat that made it look like we’d had a very bad spray tan.

One Response to Day 8 – Phnom Penh to Kampong Chhnang